US President Joe Biden has praised two Capitol Police officers who died by suicide last month as “American heroes” for their service during the January 6 riot, which he described as an attack on “our very democracy.”

The president’s tweet on Tuesday echoed the words of House Speaker Nancy Pelosi, who had praised the deceased Officer Gunther Hashida on Monday, following his death on July 29, as one who had “risked his life to save our Capitol, the Congressional community and our very Democracy.”

When the United States Capitol and our very democracy were under attack on January 6th, Officers Hashida and DeFreytag courageously risked their lives to defend them. They were American heroes. Jill and I are keeping their loved ones in our prayers during this difficult time.

Hashida was found dead at his home on Thursday. Officer Kyle DeFreytag, reported to have also died by suicide, was found on July 10.

The latest officer deaths raise the number of Capitol Police suicides in the wake of the riot to four. A fifth officer, Brian Sicknick, also died soon after the demonstration, though his death by stroke was ultimately confirmed to be from natural causes after much rumormongering by the media.

While the events of January 6 have been described by the Biden administration, the Democratic Party, and sympathetic media as an “armed insurrection,” Republicans have downplayed the day’s events and suggested the administration and Democrats are using it to push their political agenda and cast Trump supporters are domestic terrorists.

The only person who died as a result of the riot itself was Air Force vet Ashli Babbitt, a Trump supporter, who was shot by a Capitol Police officer.

Three others who died at the Capitol, all among the protesters, died of heart attack, stroke, and drug overdose. However, dozens of Capitol Police were reportedly injured on that day.

The apparent intention of Biden’s words regarding the dead officers was not lost on his social media supporters, who were quick to blame former President Trump for the officers’ suicides, despite the fact that nothing has surfaced indicating the reasons they took their own lives.

We hold Trump responsible for these suicides.

Hundreds of participants in the January 6 protest, which aimed to block the certification of Biden’s Electoral College win, are facing criminal charges.

Accused of everything up to and including domestic terrorism, those who’ve made it through the system have received hefty sentences – one man, who took selfies in the Senate chamber, received eight months in prison plus two years’ probation.

The FBI has dubbed them ‘homegrown violent extremists’ and used them as the basis for claiming extremism is running rampant throughout the country, even calling on Americans to turn in their family members and friends. 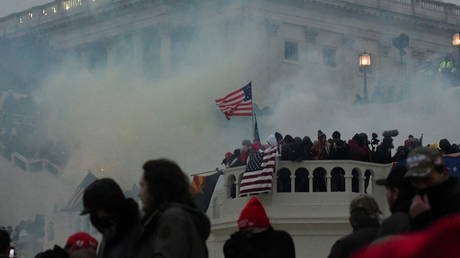 Birmingham to pardon 15,000 with marijuana convictions