A Gallup poll has shown that US and Canadian employees have become more stressed by their work days than the rest of the world since the Covid-19 pandemic started.

While Gallup’s annual State of the Global Workplace report highlighted that many are positive about the future as businesses begin reopening and pandemic-era restrictions are rolled back, it also found that a majority of US and Canada workers (57%), combined for the survey, have felt daily stress from their workloads.

That number is an 8% uptick from 2019. While the Covid-19 pandemic placed many new hurdles in front of businesses and employees, many of whom resorted to working remotely, the stress rates in the US still appear higher. For instance, less than 40% of workers in Western Europe said they felt stress from their work, which is actually a 7% decline from the previous year.

The average for the US is also more than 10% higher than the average rate of stressed workers around the globe (43%), though that global average for daily stress has also increased from 38% in 2019.

Employee engagement for North American workers is higher than in other regions, according to the poll. During the pandemic, US workers said their engagement in work increased over 30%, while workers from around the world reported a decrease in engagement at work.

Stress levels for US workers rose among women and people under the age of 40, as over 60% of each reported feeling high levels of daily stress from work. By comparison, just over 50% of men reported the same stress, and only 40% of workers over 40 said they felt such worry.

Gallup’s report included between 1,000 and 2,000 respondents for each region surveyed, and has a margin of error of 1% to approximately 5%. 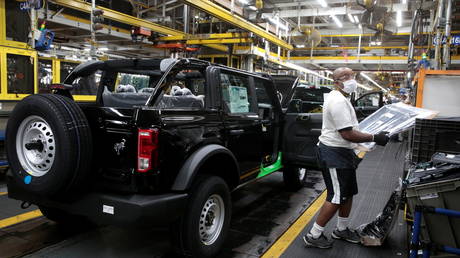 Blinken: US will aid Gaza without helping Hamas

FBI agent in investigation of Whitmer kidnap plot is charged