In the New York Times’ latest internal scrap, the paper’s leading advocate for critical race theory allegedly doxxed a reporter for calling out her hypocrisy, after a veteran journalist was forced out for using “the N-word.”

Donald McNeil Jr., the New York Times’ top reporter on the Covid-19 pandemic, resigned last week. McNeil, it had been revealed, used a racial slur while on a trip to Peru with students in 2009. McNeil simply repeated the term after a student inquired about its usage, and the paper backed him up, saying he had no malicious intent. Nevertheless, he resigned after 150 employees demanded he be punished, writing in a letter that “our community is outraged and in pain.”

Enter Nikole Hannah-Jones, the Times reporter behind the controversial ‘1619 Project’, a work that reframes the entire history of the US as one of white supremacy, and one which prompted former President Donald Trump to wage a government-wide war on the “toxic” ideology of ‘critical race theory’.

In a deep-dive article into the Times’ internal strife, Washington Free Beacon reporter Aaron Sibarium discovered that Hannah-Jones had used the word “n***er” twice in a pair of 2016 tweets. While Hannah-Jones – who is black – didn’t use the word maliciously, she nevertheless escaped the scrutiny of her colleagues, who had told Sibarium that, “even in ironic or self-mocking quotations,” racial slurs and epithets would not be tolerated at the paper. “We do not tolerate racist language regardless of intent,” executive editor Dean Baquet told staff in an email.

Sibarium did some digging, and found that Hannah-Jones had used the exact same slur in 2016, while she was quoting black comedian Larry Wilmore.

He contacted Hannah-Jones, asking her whether her “intent made a difference” in this case. In response, Sibarium said Hannah-Jones posted his email on Twitter, along with his phone number, and joked about this with her followers.

Hannah-Jones has taken down the tweet that contained my phone number. I appreciate that.

But it took her over 24 hours to do so—and she clearly knew my number was out there. pic.twitter.com/EBdbPPwjpf

By Tuesday morning she had deleted the tweet, along with her old tweets containing the word “n***er.” In fact, some users noted, all recent tweets going back to November 2020 also seemed to have been suddenly deleted.

Nikole Hannah Jones seems to have nuked all of her tweets post November 2020.

Whatever may or may not be happening behind the scenes, Hannah-Jones was pilloried by pundits and commentators online. “Just imagine the reaction if that were done *to* her rather than by her, even though she wields infinitely more power than he,” journalist Glenn Greenwald tweeted.

She left the email with his personal cell phone number up on Twitter for 24 hours, then deleted it. Obviously, he got messages and calls. Just imagine the reaction if that were done *to* her rather than by her, even though she wields infinitely more power than he.

Uh oh! Didn’t Nikole Hannah-Jones say that if you weren’t part of a group, you couldn’t use offensive words pertaining to them?

NHJ is a joke, and the newspaper for which she works has blown out its decency and credibility https://t.co/8Hheo6QjNZ

Hannah-Jones left her tweet containing the phone number online for more than 24 hours, according to Sibarium. He claims that the doxxing was “more annoying than alarming,” adding that he had received “some nasty voice messages but nothing serious.”

The New York Times has been in disarray of late, with the woke brigade and aging liberals duking it out for control of the Gray Lady’s agenda. The internal drama has been ongoing since the paper’s editors canceled and apologized for an op-ed last summer by a sitting US Senator, Tom Cotton, after the ‘woke’ staff claimed his article – which called for the deployment of troops to quash violent ‘Black Lives Matter’ riots – put their lives in danger. 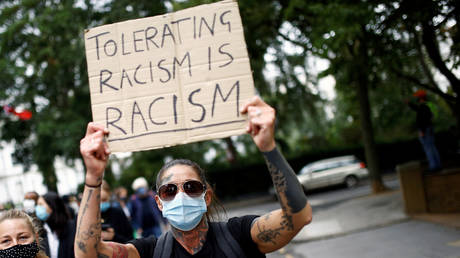