DUBAI 23rd December 2020 (WAM) – Egypt’s Minister of State for Information Dr. Osama Heikal has called for urgently developing an integrated media strategy in the Arab world that will help strengthen unity and enhance prosperity in the region.
He made these remarks at the 19th edition of the Arab Media Forum organised virtually on Wednesday by the Dubai Press Club. Dr. Heikal discussed the various transformations and challenges facing the region and the key role that the media can play in the next phase.
The session was attended virtually by Chairman of the Dubai Media Council H.H. Sheikh Ahmed bin Mohammed bin Rashid Al Maktoum.
During his virtual address, Dr. Heikal said the rise of new technologies and the digital revolution are two of the most critical developments creating large-scale change in the world. He added that the region’s people must also be equipped with the skills required to develop and disseminate news content using the tools currently available.
Dr. Heikal laid emphasis on developing a media strategy in the Arab world that facilitates closer engagement between Arab governments and citizens. “This strategy will help develop media institutions and strengthen communication between the media and the public,” he noted.
He further emphasised that this strategy must seek to ensure all forms of media, both traditional and new, can unite public opinion in support of sustainable development and the preservation of Arab identity.
Held under the theme ‘Arab Media: The Future is Digital’, the 19th edition of the Arab Media Forum saw more than 10,000 people tune in to the Forum’s sessions, which were broadcast live on a special platform set up for the Forum and through the live feature on DPC’s official Twitter, Facebook and Instagram accounts. 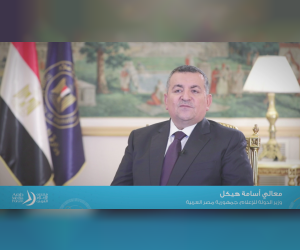