Are we ‘following the science’? Fauci tells kids he flew to North Pole and VACCINATED SANTA in Covid-19 advisory on Sesame Street

Dr. Anthony Fauci has been known to change his expert opinions on Covid-19 topics, such as whether to wear a mask, but his statements on Santa’s readiness for a pandemic Christmas took a head-scratching, jarring turn on Saturday.

Appearing on CNN’s ‘Sesame Street Special’, the mainstream media’s favorite Covid-19 authority was asked by children how Santa Claus would be able to visit their houses amid the pandemic.

“I took care of that for you because I was worried that you’d all be upset,” Fauci responded. “So what I did a little while ago, I took a trip up there to the North Pole. I went there, and I vaccinated Santa Claus myself. I measured his level of immunity, and he’s good to go.”

The message might have sounded reassuring, except Fauci himself said just a few weeks ago that Santa wouldn’t need a vaccine. “Santa is exempt from this because Santa, of all his good qualities, has a lot of good innate immunity,” Fauci told USA Today.

The apparent flip-flop left some on Twitter to wonder whether a ‘conspiracy’ was afoot. Even without the conflicting statements, the North Pole trip sounded far-fetched, given the travel restrictions imposed in Washington.

“What is he hiding, and why is he lying?” podcast host Stephen Miller asked. Another commenter was similarly puzzled: “Not to get picky, but didn’t Fauci already say Santa was immune? It just doesn’t feel like we are following the science.”

Others suggested Fauci might be giving false hope to the children of parents who won’t be able to afford presents this year because of the financially devastating Covid-19 lockdowns that he and other public health officials recommended. Coronavirus data analyst Justin Hart quipped that “of all the fictions Fauci has conjured up,” his Santa-vaccination tale is the “most believable.”

Of all the fictions Fauci has conjured up: masks stopping a viral pathogen; Covid causing Kawasaki; no-harm lockdowns; massive asymptomatic spread… vaccinating Santa is actually the most believable. https://t.co/2UqnIYtLyd

In contrast, Fauci fans praised his latest act of alleged heroism. “Thank you, Dr. Fauci, for vaccinating Santa,” Chelsea Clinton tweeted. CNN correspondent Jamie Gangel thanked Fauci “for everything you do, but especially this: ‘Santa is good to go.’”

Meanwhile, Joe Biden supporters kicked around a few ideas for honoring Fauci. “Someone give Dr. Fauci some kind of humanitarian award,” one commenter tweeted. “That man is such a gift to America.” Others debated whether he should be in line for a Nobel prize or the Medal of Freedom.

“I don’t think that’s a stretch at all,” one Fauci admirer said. “He’s front and center now because of Covid, but he’s been diligently plodding along, making our country safer, for decades. He deserves all the accolades.”

But Fauci isn’t the only star of the US political establishment to stage an arguably creepy Santa-themed propaganda pitch this week. Michigan Governor Gretchen Whitmer held a Zoom call with Santa – apparently before Fauci arrived at the North Pole with his syringe – to show children asking scripted, Covid-19 questions. The key takeaway was: Stay home, call your grandparents and other relatives, but don’t have Christmas gatherings.

“This year has to look a little bit different so we can stay safe,” Whitmer said. 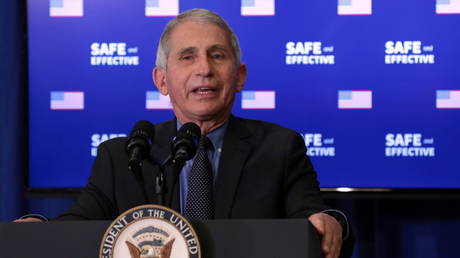