The US Capitol Police have suspended at least two officers and are probing as many as 15 others for their conduct during last week’s riot in Washington, DC, which saw election-fraud protesters storm the halls of Congress.

One of the suspended officers was spotted wearing a Make America Great Again hat, while another was seen taking a selfie with a pro-Trump rioter as the crowd surged into the Capitol building, Representative Tim Ryan (D-Ohio), who heads a panel investigating the January 6 unrest, said on Monday.

“The interim chief is taking aggressive action within the department to find out if there was any facilitation or help” given to the violent protesters, Ryan said, adding that around 10 to 15 other officers are also under investigation in connection with the deadly riot.

The lawmaker also cited reports that one officer was taken into custody after the showdown in DC, but his spokesman later clarified that no such arrest had been made, noting that Ryan apparently misspoke.

While Ryan did not identify any of the suspended officers, a photo from the riot shared on social media shows a police officer donning a signature red MAGA hat, while addressing the crowd via megaphone.

Our @Report4America corps member Chris Jones was on the ground as a mob took over the U.S. Capitol in Washington yesterday. See more of his 📸 here: https://t.co/HGpN6RVSaN pic.twitter.com/BndWtQtJgk

Marine Corps veteran and journalist Chris Jones, who took the picture, told Military.com that the officer put on the cap to “distract the crowd” that was then rushing towards an open door of the Capitol, apparently an effort to buy time for fellow officers to seal off the entrance.

In other footage from the scene that has made rounds online, another officer was seen  posing for a photo with a protester as dozens streamed into the Capitol around him.

Cops are taking selfies with the terrorists. pic.twitter.com/EjkQ83h1p2

In a separate statement on Monday, the Capitol Police’s newly-appointed acting chief Yogananda Pittman said that any officers who ran afoul of department policy will face “disciplinary action, up to, and including, terminations.”

She has confirmed that “several officers” were already suspended “pending the outcome of their investigations.”

Police guarding the Capitol were overwhelmed on Wednesday as demonstrators forced their way into the building. The riot resulted in five deaths, including one officer and a protester who was shot by police while trying to enter the House chamber.

While some police have been hailed for defending the Capitol and the lawmakers inside – officer Eugene Goodman, for instance, was celebrated as a “hero” for steering a group of rioters away from the Senate chamber – members of Congress have questioned whether the invaders were helped in some cases.

House Majority Whip James Clyburn (D-South Carolina) has suggested that someone with access to the Capitol was complicit in telling protesters how to find his unmarked office, where he does most of his work, while another office bearing his name managed to endure the riot unscathed.

Wow. Rep. Clyburn says rioters somehow knew where his unmarked office is and showed up there on Wednesday.

“That to me indicates something untoward may have been going on,” he tells Jake Tapper pic.twitter.com/qlyVrdTqPp

Democratic politicians also suggested a racial motive for the subdued law enforcement response. “No one can tell me that if it had been a group of Black Lives Matter protesters yesterday that they wouldn’t have been treated very differently than the mob that stormed the Capitol,” President-elect Joe Biden said. “We all know that’s true, and it’s unacceptable.” 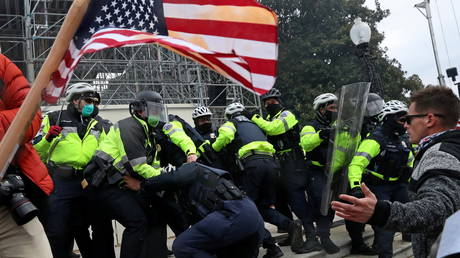 ‘It’s going to get worse’: Fauci & other health officials warn of likely coronavirus...

Etisalat, du to use AECB’s credit reports and credit scores