Democratic Senator Amy Klobuchar appeared to be breaking with the party leadership in rejecting Donald Trump’s demand for raising paychecks in the stimulus package to $2,000. She said lawmakers should overcome a possible veto.

President Trump threw a wrench into the passage of the stimulus measures by threatening to veto the omnibus spending bill, unless Congress amends it and raises “the ridiculously low $600” in direct payments to a $2,000 level. Speaker Nancy Pelosi said she was all for it.

Republicans repeatedly refused to say what amount the President wanted for direct checks. At last, the President has agreed to $2,000 — Democrats are ready to bring this to the Floor this week by unanimous consent. Let’s do it! https://t.co/Th4sztrpLV

However, some lawmakers rallied against the call, and arguably nobody was as tone deaf as former presidential candidate Amy Klobuchar. Speaking to MSNBC’s Rachel Maddow, she called Trump’s demand “an attack on every American”.

Amy Klobuchar just went on MSNBC to call raising the stimulus to $2,000 per person “an attack on every American” and suggests Congress override Trump’s veto. pic.twitter.com/mEdDUY9dNu

Some viewers decided that Klobuchar probably meant to say she didn’t believe Trump could make the Republican party actually subscribe to $2,000 paychecks and the only tangible result of the maneuvering would be a delay before the compromise bill comes into force. But some saw it more as a principled refusal to give struggling Americans more than the much criticized $600.

She said a lot of things that were true in order to cover up the fact that she is indeed opposing a revision to the stim. bill that would raise the amount of money being distributed to the citizenry from a pathetic and downright insulting $600 to a slightly less insulting $2000.

“Obviously, we have the votes to override his veto in the House, we have those votes. But he should not be doing this right now,” she said of Trump’s call. “He is literally trying to burn this country down on his way out.”

Trump reportedly wanted to make his demand for higher paychecks while the negotiations on the stimulus package were still underway, but his aides talked him out of it. The reason was that pushing it would have bumped the size of the bill to over $1 trillion, and Republican lawmakers would not have accepted it, according to the Washington Post.

Senator Klobuchar’s claim that the situation with the stimulus shows the US public which party has their back may not be as obvious as she appears to think. In October, the Trump administration offered Democrats a $1.8 trillion stimulus, but Speaker Pelosi rejected it, stating that it was not good enough.

Pelosi insisted that her rejection was not a mistake even as she accepted a smaller relief in the current version. Joe Biden’s win in the election and the creation of a Covid-19 vaccine were “a game changer,” she explained. Critics believe that the Speaker has simply confirmed what they already knew – she didn’t want to let Trump claim a win weeks before the election and missed a chance to accept the offer, setting the President up for a fight against his own party for a larger benefit to the American public.

Whether Pelosi’s strategizing accounted for the hardships of working Americans is anyone’s guess. But after the omnibus spending bill was agreed, she described the $600 paychecks as “significant,” triggering a wave of outrage on social media. Americans got a $1,200 stimulus deposit in April under the CARES Act, complete with a memo signed by Trump accompanying every check.

You are wrong @SpeakerPelosi – The payment checks are NOT significant. I think you know that.

Madam Speaker tell us how people should spend this $600. – to feed their family? To pay rent? To heat their homes? To pay for medications? Tell us how long this money has to last. https://t.co/W4649rfOw8 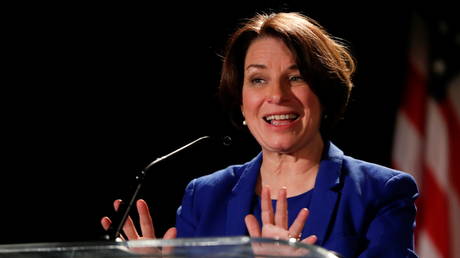 ‘This is a parody account, right?’ Marjorie Taylor Greene ridiculed for bringing Scooby-Doo meme to US Congress

When to quarantine after COVID-19 exposure, even if you’re vaccinated