An explosion in an office building in Baltimore, Maryland has wounded at least 21 people, nine of them critically – also trapping a work crew on scaffolding hanging from the high-rise, triggering a perilous rescue effort.

The blast rocked the offices of Baltimore Gas and Electric (BGE) on Wednesday morning, a 21-storey high-rise in the city’s downtown area. At least nine of the 21 victims brought to the hospital for treatment were in critical condition, according to the Baltimore Fire Department.

BCFD on a scene of an explosion with a partial roof collapse in the 100 block of W. Fayette St. At least 10 people have been transported to area hospitals; 9 in critical condition and 1 in serious condition. Media staging area at W. Fayette St. and N. Charles St. pic.twitter.com/eq5kqUDFCB

The fire department also noted the explosion caused a “partial roof collapse.” The extent of the damage was seen in footage captured from the air by a news crew.

The explosion also left two workers stranded on scaffolding dangling precariously off the side of the high-rise, prompting a daring rescue by firefighters. With both workers still tethered to the building by wires, one was brought to safety through the 10th floor window, while rescuers had to climb up the scaffolding to cut through the 11th floor window to retrieve the second. Both were in “pretty decent condition” after the incident, according to Baltimore fire chief Niles Ford.

#WATCH: An explosion at the Baltimore Gas & Electric building in Baltimore, Maryland left at least 21 people injured, according to the Baltimore Fire Department. For more videos like this, visit https://t.co/bHFSwmU7Nh pic.twitter.com/lF4cpNzF29

While the fire department said the cause of the blast is still under investigation, utility spokeswoman Stephanie Anne Weaver suggested that work on the office building’s “air handling and boiler system” was likely behind the blast, adding that the office was largely empty at the time of the incident due to the holidays and the Covid-19 pandemic.

The city’s firefighter’s union also noted there was evidence the explosion hit the 16th floor of the building, though did not elaborate.

💥EXPLOSION WITH RESCUE💥
39 W Lexington St 21201#DowntownBaltimore @DowntownBalt@CouncilmanETC#BCFDR1 reports evidence of an explosion on floor 16 with 2 workers trapped in scaffolding. #BCFDSOC on the way to rescue them. #BCFDEMS treating 2 people on the ground with burns. pic.twitter.com/vs7rNGMKCM

Baltimore Mayor Brandon Scott addressed the blast in a statement on Wednesday afternoon, hailing the “swift action” of the fire department and first responders. At the time, he said no deaths had been reported.

This morning an explosion at the BGE Building ignited a fire near the top of the building, trapping people on the surrounding scaffolding. Thanks to @baltimorefire for their swift action that saved 23 lives. pic.twitter.com/VuN4guCdkW 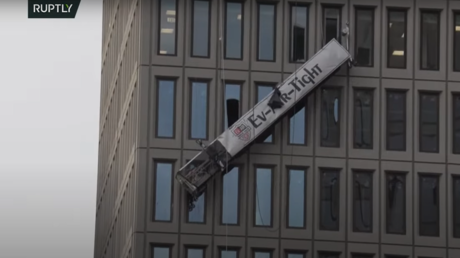