The congratulations from the White House came shortly after a landmark vote in the Israeli legislature on Sunday.

“I look forward to working with Prime Minister Bennett to strengthen all aspects of the close and enduring relationship between our two nations,” Biden said in his message.

His administration was “fully committed to working with the new Israeli government to advance security, stability, and peace for Israelis, Palestinians, and people throughout the broader region,” the president assured.

Biden insisted there was a “bond” uniting the two countries and said that “Israel has no better friend than the United States.”

Time will tell how fruitful this cooperation will turn out to be, given the two leaders seem to have opposing views on the key Middle Eastern issues.
Biden is currently working to bring the US back into the Iranian nuclear deal and has voiced support for a two-state solution to the Israeli-Palestinian conflict.

Despite opposing Netanyahu as part of a coalition of eight parties from right across the political spectrum, Bennett is also described as a right-wing politician and shares some of his predecessor’s views.

The new Israeli PM is a former settler leader who opposes Palestinian statehood and believes the Jewish state should annex more land in the occupied West Bank. As for the nuclear deal, Bennett said on Sunday that renewing it was a “mistake.” 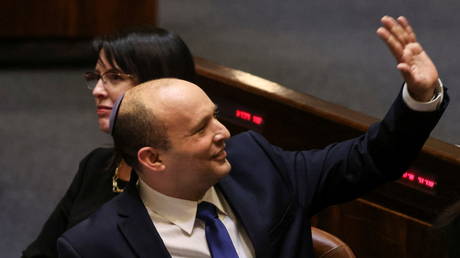