Former Director of National Intelligence James Clapper is throwing his weight behind an argument President Joe Biden made last week, saying Donald Trump cannot be trusted with classified information now that he’s out of office.

Asked what his “fear” is if Trump continues to receive intelligence briefings, which are typically given to former leaders, Clapper told CNN’s New Day Trump has “demonstrated a disdain for both the substance of intelligence as well as its protection.”

The former intelligence official then accused the former president of “weaponizing” classified material in the past, as well as sharing it “with the Russians,” without providing any evidence for that statement.

“And so I just don’t – and plus there is potential financial entanglements, there is debt, which to a normal person would be a real red flag for a judicator or somebody deciding on whether someone should have access to classified information. So for all those reasons, I think this is absolutely the right decision,” he said.

President Biden mentioned briefly in a Friday interview he had hesitation over whether Trump should receive intelligence briefings.

“What value is giving him an intelligence briefing? What impact does he have at all, other than the fact he might slip and say something?” he said.

White House Press Secretary Jen Psaki, however, later clarified the comments and appeared to suggest Trump receiving briefings would not be up to his predecessor.

Clapper being asked his ‘expert’ opinion on whether someone should be trusted with classified information or not may come across as at least partly ironic. The former intelligence official is well-known for falsely claiming under oath that the government was “not wittingly” collecting phone records of millions of Americans, a program that was exposed by whistleblower and former NSA contractor Edward Snowden.

The testimony before Congress led many, including Sen. Rand Paul (R-Kentucky), to repeatedly call for Clapper to face legal consequences for lying under oath.

Clapper has since tried to defend himself by claiming he simply did not understand the question he was being asked. 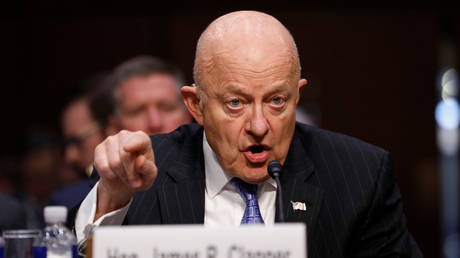