US President-elect Joe Biden will rely on career Washington bureaucrats to help him ‘reimagine’ the Pentagon, rebuild global leadership, and fix government agencies he said suffered ‘enormous damage’ from the Trump administration.

“Many of the agencies that are critical to our security have incurred enormous damage,” Biden lamented in a speech on Monday, describing them as being “hollowed out in personnel, capacity and in morale” under the administration of President Donald Trump.

The short remarks, after which he did not take questions, came after he was briefed by his transition officials working with the State Department, the Pentagon and Homeland Security. He confirmed last week’s reports of “obstruction” at the Defense Department, complaining how it came from “political leadership” appointed by Trump.

“We just aren’t getting all the information that we need… in key national security areas,” Biden said of the Pentagon, demanding a “clear picture of our force posture around the world and our operations to deter our enemies” as well as “full visibility into the budget planning” that is under way.

Calling the recent purported hack of SolarWinds software “a grave risk to our national security,” Biden said the US needs to “reimagine our defenses” in places like cyberspace rather than “continue to overinvest in legacy systems designed to address threats of the past.”

We need to close the gap between where our capabilities are now and where they need to be.

Biden described “rebuilding the full set of our instruments of foreign policy and national security” as the key challenge he and his vice-president-elect Kamala Harris are facing. He said the world needs “American engagement and American leadership” and cited climate change as the example of a threat the US can’t solve by acting alone.

JUST IN: @JoeBiden on the urgent threat of climate change and the need to engage in diplomacy to tackle the crisis:

“Climate change will continue to threaten the lives and livelihoods, public health and economics of our existence and literally, the very existence of our planet.” pic.twitter.com/Y3rzbwZC7M

Indirectly accusing Trump of taking the US out of the system of alliances with “nations that share our vision in the future of our world,” Biden said the US will have to “regain the trust and confidence of a world that has begun to find ways to work around us, or work without us.”

He vowed to “rebuild, reclaim America’s place in the world” as a country that will “champion liberty and democracy once more” and “reclaim our credibility to lead the free world.”

While all of these are general statements that have been coming from the Democrats and the Biden-Harris campaign for months, Biden did get specific about one thing – his hope that career bureaucrats in Washington will be the “incredible strength” that will enable him and Harris to achieve their objectives.

Praising them for giving his transition staff “exemplary cooperation” at most agencies, Biden described the career staff as “patriots who’ve earned our respect and should never be treated as political footballs.”

While political appointees make up the leadership of most executive branch agencies, the middle management and staff are as a rule career employees whose jobs are protected by civil service regulations. These career officials – sometimes described as “Deep State” – have fought Trump’s administration during his entire term, which became most notable during the 2019 impeachment hearings.

The key takeaway from the testimonies of Ambassadors Kent, Taylor and Yovanovitch and Lt. Colonel Vindman – both in secret and so far in public – seemed to be that US policy is created by some kind of “interagency consensus,” rather than the elected officials. 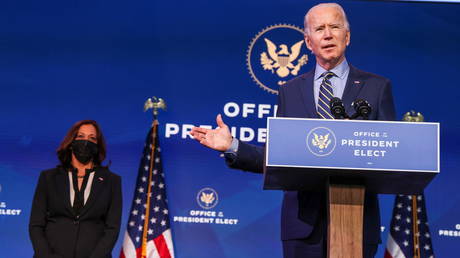