US President-elect Joe Biden has called on the Senate to leave space for his administration’s agenda as it hears a case for impeachment against President Donald Trump, who he accused of “inciting” a deadly riot at the Capitol.

Arguing that the “senseless mayhem” in Washington, DC last week was “unlike anything we have witnessed in the 244-year history of our nation,” Biden issued a statement on Wednesday holding Trump responsible for the unrest, which he deemed an “armed insurrection.”

“This criminal attack was planned and coordinated. It was carried out by political extremists and domestic terrorists, who were incited to this violence by President Trump,” Biden said, insisting that “those responsible must be held accountable.”

Biden’s full statement on Trump’s impeachment below. Biden does not say how senators should vote. pic.twitter.com/pCZSxGyHMZ

Amid the chaos in the capital last Wednesday, the president-elect called on Trump to “demand an end” to the “siege,” saying the “unprecedented assault” on democracy and the rule of law verged on “sedition.” His latest statement goes a step further, however, directly blaming the president for the violence, which left at least five dead in its wake.

With the Democrat-controlled Congress floating a new article of impeachment against Trump on Wednesday over his handling of the riot, Biden also asked the Senate – which will be responsible for hearing the case and voting on whether to convict – to balance the new impeachment drive with the agenda of the new administration, such as filling cabinet positions and “getting our vaccine program on track.”

“Today, the members of the House of Representatives exercised the power granted to them under our Constitution and voted to impeach and hold the president accountable,” he said, while voicing hopes that “the Senate leadership will find a way to deal with their Constitutional responsibilities while also working on the other urgent business of this nation.” 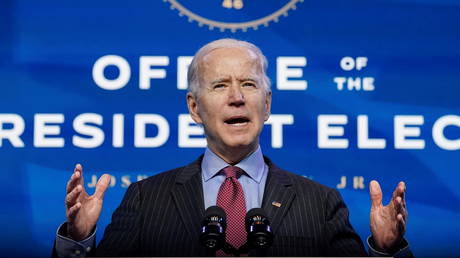 National Guard to remain in Washington, DC until MARCH to provide security for impeachment trial – report