President Joe Biden’s son Hunter said that he got a well-paid job with Ukrainian gas company Burisma – despite having no experience in the energy industry – due to his father’s surname being “synonymous with democracy.”

Hunter Biden had joined the company’s board of directors in 2014 after Ukrainian President Viktor Yanukovich was ousted and exiled to Russia, with the Obama administration supporting the protesters. Joe Biden oversaw US policy in Ukraine during his time as vice president between January 2009 and 2017.

Despite accusations of nepotism and corruption, Hunter Biden said in an interview with the BBC on Tuesday that he received the position due to his last name being seen as “synonymous with democracy and transparency.”

“I think that they saw my name as gold,” Biden said, adding that “one of the reasons” they hired him was because Burisma “wanted to create a bulwark” against “Russian aggression.”

“They knew that they had to expand internationally and into other sectors in order to diversify and protect themselves… The Biden name is synonymous with democracy and transparency,” Biden concluded. “That’s why I said it was gold to them.”

The 51-year-old lawyer and investor has been the subject of numerous scandals and attacks by Trump and other Republicans prior to and during the 2020 election.

In October, the New York Post reported that Hunter Biden had introduced his father to a Burisma executive just less than a year before President Biden urged then-Ukrainian President Petro Poroshenko to fire prosecutor Viktor Shokin, who happened to be investigating Burisma.

The report – which was based off of emails allegedly found on Hunter Biden’s abandoned laptop – also claimed Hunter had repeatedly peddled his father’s influence to a number of foreign companies.

The story and how the New York Post had acquired the emails became the center of a large controversy in the lead-up to the 2020 presidential election, with supporters of Biden alleging without evidence that it was part of Russian disinformation.

However, Hunter Biden admitted to CBS News this week that he had previously been struggling so much with his drug addiction that he wasn’t “keeping tabs on possessions” like his laptop. According to the New York Post, the laptop had been taken to a repair shop but Biden never returned to collect it.

The laptop also contained sensitive material of Biden under the influence of drugs.

President Joe Biden, however, has denied allegations of corruption and claimed he had acted fairly as part of his own anti-corruption campaign against the Ukrainian prosecutor.

Hunter Biden additionally told CBS News that he is “fully cooperating” with a tax investigation and is “confident that at the end of the day it’s all gonna be fine,” and also claimed that he never gave his father any percentage of the money earned from foreign business deals. 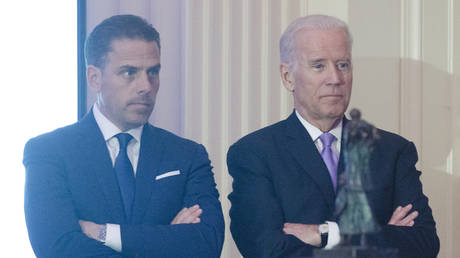 Iran enriches uranium to its highest level ever

No license to carry: Texas legislature strips down rules for gun owners