Supporters of President Donald Trump are urging him to veto the long-awaited Covid-19 relief bill, taking issue with it being tied to foreign aid, the amount of in-person payments and some provisions unrelated to the pandemic.

After the House and the Senate sealed the deal on a $900 billion plan on Monday night, some US conservatives took to Twitter, highlighting the legal details they found questionable.

A hefty amount of outrage was caused by the stimulus bill being tied to billions in foreign and military spending, as both were part of the Consolidated Appropriations Act. Online commenters were dismayed at the US government being ready to spend hundreds of millions on foreign aid, while in-person checks for many struggling Americans would amount to a mere $600 per person. For example, $1.3 billion would go to Egypt, $700 million to Sudan and $500 million to Israel.

@realDonaldTrump you MUST veto this farce, aka COVID relief bill!!! This isn’t a stimulus package. This is a MASSIVE foriegn pork bill. And really?…$1,800 to illegals and $600 back to the tax paying citizens??? Billions going foriegn nations? I don’t think so.

“Every American left and right should be calling for a veto of this stimulus ‘deal’— which provides more funding to foreign governments and to American arts centers, than to the American people,” tweeted conservative commentator Candace Owens.

Every American left and right should be calling for a #VETO of this stimulus “deal”— which provides MORE funding to foreign governments and to American arts centers, than to the American people.

RETWEET so EVERY American sees how corrupt the Covid-19 “relief” packing is. pic.twitter.com/N08YB51vsx

There should not be any foreign aid given to any country, ever, but especially not in a COVID relief bill that’s supposed to be helping Americans

Dear President Trump,
I would rather not receive a pitiful $600 check of my own tax money, if it means that Democrats and RINOs will benefit the most from it with the pork they stuffed in for themselves.

Veto it, and fight for our freedom to be open instead.🙏🏻@realDonaldTrump

Some others were baffled by several provisions of the relief bill that seem to be less discussed in the media than the in-person checks.

For example, in a major win for the entertainment industry, the stimulus bill would make illegal media streaming a felony with up to 10-year prison sentence.

Among other curious parts, the supposed relief plan also includes an extension of a tax credit for racehorse owners as well as an official US stance on the reincarnation of the Dalai Lama, intended as a condemnation of China’s treatment of Tibetan Buddhists.

Some Twitter users thought Trump should at the very least veto specific items in the bill to “cut off all the money for stuff not related to Covid-19.”

@realDonaldTrump
VETO THIS POS!!😡😡🤬
Banning free speech by preventing streaming on line?
What the heck sir???

@realDonaldTrump 1 veto the stimulus & cut off all the money for stuff not related to covid like money for sudan, pakistan, and other ridiculousness like reincarnation of dahli llama. We the people could use that money more than millionaires could. Just like the last relief bill

I wonder how many senators/reps own a racehorse or a friend of them who does? This is why we need the line item veto.

@POTUS Please veto this stimulus bill…$600.00 is an insult to the American people when giving Burma,the Sudan and Asia billions. Also Race horse tax breaks and 4 billion for MTA in NYC..No thanks.

The sitting president is yet to comment on any of the line items in the bill or the Consolidated Appropriation Act. Previously, however, Trump advocated for a more than twice as large $2,000 in-person payment, but was talked out of the idea by some of his staffers, according to the Washington Post’s sources.

Trump is expected to sign the Congress-approved bill later this week. 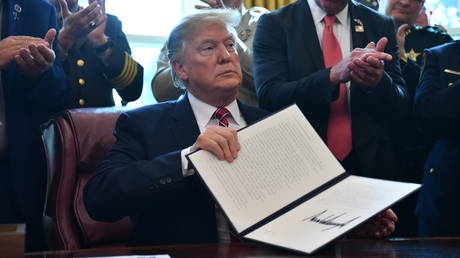 Black teen calls 911 on SELF, claims racial profiling, feared he could be in a ‘similar situation as George Floyd’

Over 52 million early votes cast in US election, putting country on pace for...