A black man has tested positive for Covid-19 soon after a maskless white officer mistakenly detained him at a mall in Virginia, his fiancee has said. Police previously apologized and admitted the officer had broken Covid-19 rules.

“I’m very angry that they put my family at risk. Me and Jamar, that’s one thing. But our kids, that’s what upsets me the most,” Covil said.

They arrested him, of course, no gloves, no masks. They took us out of our bubble, out of our safe space… We are around each other all the time.

Covil said Mackey has gone into quarantine with mild symptoms, including a “low grade fever, a cough, and a sore throat.”

It is not clear how and when he was infected.

The man wrongfully detained by @vbpd, Jamar Mackey, has tested positive for #coronavirus per his fiancé. Mackey has mild symptoms. We are waiting to hear from @vbpd. pic.twitter.com/EPoh8RH9CA

Mackey was handcuffed and briefly detained while having lunch with Covil, their 13-year-old-son, and a baby in the mall food court in Virginia Beach, Virginia on December 19. The officer was not wearing a mask when he detained Mackey, who had a mask, and escorted him to the parking lot. The video of the incident has since gone viral.

The officer did not initially explain to Mackey why he was being apprehended. “I want to talk to you, OK?” he said after approaching Mackey in the mall. The man repeatedly asked the officer to state what was going on, to which he replied, “Listen I’m gonna explain all of this,” and continued to escort Mackey out of the mall.

The officer mentioned they were looking for a man who drove a black truck. “Y’all got the wrong person. We don’t even have a black truck,” Mackey replied.

On the parking lot, they were approached by another officer who suggested that they must have had detained the “wrong” person. Mackey was released shortly afterward.

The officer then told Covil that Mackey matched the description of a man who had used stolen credit cards. “I sincerely apologize. It was a complete misunderstanding,” the officer said in the video.

“You have a right to be upset, sir,” the officer said.

Virginia Beach Police Chief Paul Neudigate apologized to Mackey and his family two days after the incident. He promised the issue of the officer not wearing a mask would be “addressed” in an internal review.

“We are required to wear masks. We set the standard, we set an example for our community,” the police chief said.

The Virginia Beach Police Department could not say if the officer involved in the incident had Covid-19, due to health privacy laws, TV channel WVEC reported. 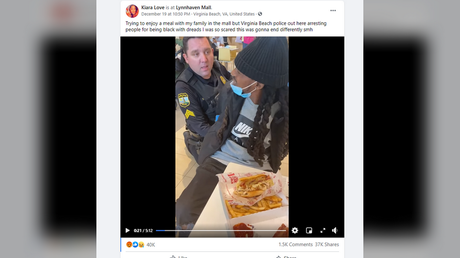 Over 61,000 new coronavirus cases in Brazil