Two self-appointed enforcers of the Covid-19 rules, including a Huffington Post contributor, tried to bust fellow train passengers whom they caught drinking coffee without masks, only to back down when the crowd turned on them.

“I have 70,000 Twitter followers, buddy,” video journalist Sandi Bachom told the alleged coronavirus criminals as she filmed them on her smartphone. She and another woman encountered the offending passengers as they boarded a train at New York’s Pennsylvania Station. But the two men said they only removed their masks to drink coffee, and a video circulating on social media Tuesday shows other passengers coming to their defense.

“These men are just drinking coffee,” a woman says. “They’re allowed to have a mask off when they’re drinking.” Bachom, perhaps missing the point, says, “They weren’t wearing masks.” One of the men reiterates that they were drinking. The woman then says, “You know what’s safer than a mask? Social distancing. That’s more effective than the mask, so why don’t you step back and leave him alone?”

People have lost their damn minds.

Bachom, apparently lacking in self-awareness about her own behavior, tries to brush the woman away, saying, “You’re not involved.” The video then shows her trying to bring the conductor into the dispute, complaining that she had witnessed the men with their masks off. “Please, can you help us?” she asks.

“My favorite character in this one-act play is the train conductor,” Rebel News founder Ezra Levant said on Twitter.

My favorite character in this one act play is the train conductor. pic.twitter.com/1HtaHuVBJh

The woman who defended the two coffee-drinkers happened to be conservative activist Ashley St. Clair, who filmed and posted the video. “People have lost their damn minds,” she told her 388,000 Twitter followers. “If you’re that scared, don’t travel. Stay home.”

It later came to light that the lead mask enforcer in the video was Bachom. “I didn’t think this video of Ashley St. Clair’s encounter with a mask Karen could get any funnier, but now it turns out the Karen is a Huffington Post contributor,” filmmaker Dinesh D’Souza tweeted.

I didn’t think this video of @stclairashley‘s encounter with a “mask Karen” could get any funnier, but now it turns out the Karen is a Huffington Post contributor!

St. Clair posted another video saying that the self-appointed Covid cop had apparently found her video on social media and came over to her seat to accost her. She posted footage of the second confrontation, in which Bachom rushes to her seat – also filming with with her own smartphone – to call her a “fu**ing doxing bitch,” adding “You Nazi bitch. You doxxed me.”

“I did not dox you… I posted a video of you on a public train. I don’t even know who you are,” St. Clair replies.

“Well, everybody knows now, all your little Nazi friends, your little conservative MAGA friends,” Bachom says, to which St. Clair responds “This is not a good look, honey.”

These people are mentally deranged! pic.twitter.com/AA8xs1NlTZ

As Bachom continues to lob insults, St. Clair asks for someone to again retrieve the conductor because she’s being harassed.

“You’re harassing me. You put me up on the internet,” Bachom continues, apparently forgetting that she had just boasted of her own army of Twitter followers moments prior, implicitly threatening the maskless coffee-drinkers with the very same ‘harassment.’

The video then continues after the conductor-turned-arbitrator returns. Bachom argues with another passenger, calling him a “MAGA a**hole” before walking back toward her seat yet again.

St. Clair later returned to Twitter with a video sent to her by the men on the train, with one addressing the camera: “Ashley, the four of us want to say thank you for sticking up for us on that train today. The woman came running in, telling us we weren’t wearing our masks when we were sipping coffee – you’re a hero today, thank you very much.”

The one speaking is a disabled veteran as well.

Thank you for your service— MY HEART IS SO FULL! ❤️🇺🇸 pic.twitter.com/e6rFFMv2fE

Ironically, Bachom has repeatedly called for people to dox alleged racists on her Twitter account. She has also at times denied the existence of Antifa, a loosely organized movement of leftist militants, while on other occasions has declared herself a member of the group.

doxx their asses this is my old high school from 1962

Bachom later described her own version of Tuesday’s train confrontation, saying that she had encountered “some maskless MAGAs in our seats. I take out my camera and start filming, and this right-wing blogger with a ‘Trump won’ mask starts filming, too. Next thing I know, she posts the video on Instagram and Twitter to 300,000 followers calling me crazy mask lady. Your guy lost.”

She then tried to discredit St. Clair, saying “this chick got fired from her job for posing with white nationalists. This is my surprised face. Pure evil.” But the journalist’s effort at damage-control went over about as well as her original mask-policing effort, triggering a flood of mockery online.

“This is you,” Human Events editor-in-chief Will Chamberlain said in a tweet, accompanied by a meme of Mr. Rogers donning a clown mask. Evie magazine founder Brittany Martinez asked, “Are you proud to bully a girl half your age and a guy far away from you for drinking coffee? What is your issue?”

Are you proud to bully a girl half your age? And a guy far away from you for drinking coffee?? What is your issue??

Writer Shem Horne also quipped: “I have 83,000 Twitter followers, so that means that you are wrong,” while radio host Mike Mason said it was shocking that Bachom has press credentials, adding “This is what we call a major life fail, Sandi.”

I have 83,000 Twitter followers so that means that you are in the wrong.

This is what we like to call a “major life fail” Sandi. Sorry you had to deal with this crazy leftist @stclairashley. Shocking she has press credentials though, lol. 🤦🏼‍♂️ 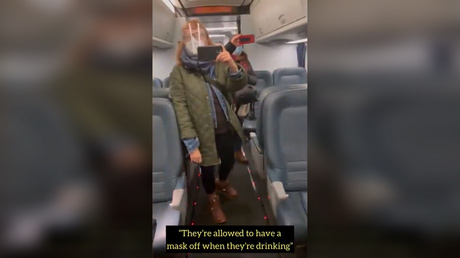 ‘We hope to join you at Mars soon,’ says NASA as Hope Probe reaches...