DGR Sharjah embarks on a journey of collaboration with Afghan cities

SHARJAH, 11th January, 2021 (WAM) — The Department of Government Relations (DGR) Sharjah has evaluated ways to boost bilateral relations between the emirate and cities of Afghanistan, particularly in cultural and economic sectors.
Sheikh Fahim Al Qasimi, Chairman of DGR Sharjah, received an Afghan delegation, headed by Masood Ahmad Azizi, Consul-General of the Islamic Republic of Afghanistan in the UAE.
The delegation was offered an overview of the emirate’s long-term and continued efforts to build a knowledge-based society and a diversified economy.
The two sides explored opportunities to mutually advance vital economic sectors, by paving the way for entrepreneurs, businesses and institutions in both countries to build qualitative partnerships.
The delegations also looked at the possibility of furthering the Emirati-Afghani dialogue through cooperation in the sectors of culture and knowledge. A proposal was made to take concrete steps in the direction, starting with the translation of a selection of Emirati books into, Pashto – one of the official languages of Afghanistan, and introducing Arabic readers to Afghan literature.
Suggestions to increase bilateral trade through meetings between Afghani businesspersons and economic entities in Sharjah were also proposed.
Sheikh Fahim stressed on the historical ties between Sharjah and Afghanistan in various fields, pointing out that the emirate was keen to partner and work with cities worldwide, especially after the challenges of 2020 had necessitated a paradigm shift in the approach towards international cooperation for development.
He extended an invitation to the Consul-General to explore the prospect of establishing an Afghani cultural centre in Sharjah, which would bring the nation’s local art, literature and culture to the residents and visitors of the UAE, and offer them a unique opportunity to learn the Pashto language.
Azizi hailed the longstanding friendship between the two nations in various sectors, emphasising Afghanistan’s keenness to boost cultural and economic ties with Sharjah.
He also welcomed Sharjah’s offer to establish an Afghani cultural centre in the emirate, noting it would serve as a bridge between the Emirati community and nearly 200,000 Afghans residing in the country. 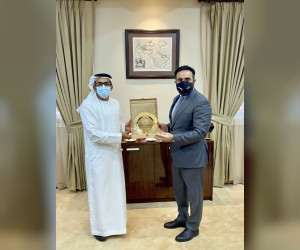