Members of the US Space Force will now officially be known as “guardians,” Vice President Mike Pence has announced, but critics lambasted the new moniker for unoriginality, arguing it was lifted from Marvel’s superhero franchise.

The VP unveiled the new title during a White House ceremony on Friday to mark the one-year anniversary of the country’s youngest military branch, with the newly christened “guardians” joining soldiers, sailors, airmen and guardsmen in the ranks of the armed forces.

The Space Force announced the name upgrade in a series of tweets, stating the name was chosen after a “yearlong process that produced hundreds of submissions and research” by “space professionals” as well as members of the public.

The name Guardians connects our proud heritage and culture to the important mission we execute 24/7, protecting the people and interest of the US and its allies.

Today, after a yearlong process that produced hundreds of submissions and research involving space professionals and members of the general public, we can finally share with you the name by which we will be known: Guardians. pic.twitter.com/Tmlff4LKW6

Despite the Force’s enthusiasm, online observers were quick to rain on the parade, many immediately linking the new name to Marvel Studios’ 2014 blockbuster superhero flick, ‘Guardians of the Galaxy,’ suggesting the military go back to the drawing board.

Trump administration uses the Starfleet insignia as the Space Force symbol, now they take the page off of Guardians of the Galaxy, can these knuckleheads come up with anything original? https://t.co/zXSMVeic3F

Some even went as far as to predict legal troubles for the Pentagon, as Marvel is a subsidiary of the highly IP-conscious media monolith Walt Disney Studios.

Guardians of the Galaxy. I smell a lawsuit coming.

However, the Space Force preempted such objections, noting that the “guardians” name has a “long history in space operations,” predating the superhero film franchise by decades.

The opportunity to name a force is a momentous responsibility. Guardians is a name with a long history in space operations, tracing back to the original command motto of Air Force Space Command in 1983, “Guardians of the High Frontier.”

Other commenters offered a litany of suggestions for alternative names, ranging from Storm Troopers, Jedi Knights, the “Science Police” and – apparently a crowd favorite – Space Cadets.

I can’t believe they didn’t call them Storm Troopers.

Reactions weren’t all mockery, however, with some observers arguing the pop culture tie-in will help to “inspire young people” and generate interest in space, pushing back against the “troll-bros” savaging the new designation.

“I [gotta] stand behind the branding of any extra planetary forces to match sci-fi,” one user said. ”Every single race asked to call itself something and I am very down with the idea of some other alien race looking up to the technologically advanced humans.”

Granted, ‘Space Guardians’ might sound a bit cheesy to middle-aged troll-bros who dunk on everything that’s earnest, heroic, & inspiring.

But the point of the name it to recruit earnest, heroic, & inspired young people, who grew up in the MCU and still think space is cool af. https://t.co/2Wa25ec1io

Friday’s announcement was not the first time the Space Force faced charges of unoriginality. When the service rolled out its official logo early this year, critics pointed to close similarities to the emblem of Starfleet, the fictional space command in the iconic Star Trek series. As with the “guardians” title, netizens also joked that the logo would prompt lawsuits, deeming it a “trademark violation.” To date, no suits have been filed. 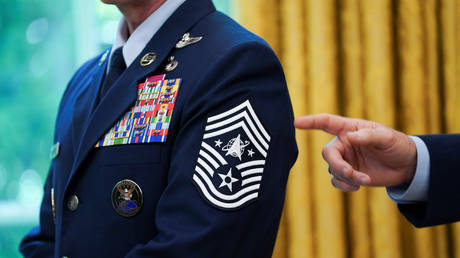