The US Department of Justice has declined to bring federal charges against two Ohio police officers involved in the 2014 shooting of Tamir Rice, a 12-year-old boy with a toy gun, pointing to a lack of evidence.

The DOJ said it would close its investigation into the two Cleveland officers, Timothy Loehmann and Frank Garmback, in a lengthy press release on Tuesday, noting that it would not pursue federal charges linked to obstruction of justice and a civil rights violation.

“In sum, after extensive examination of the facts in this tragic event, career Justice Department prosecutors have concluded that the evidence is insufficient to prove beyond a reasonable doubt that Officer Loehmann willfully violated Tamir Rice’s constitutional rights, or that Officers Loehmann or Garmback obstructed justice,” the DOJ said, more than six years after the fatal shooting.

Rice was shot dead by Loehmann in November 2014 while playing with a toy gun outside a Cleveland recreation center. Though officers responded to a call that a “guy with a pistol” was aiming a weapon at bystanders, the caller had informed the 911 dispatcher the individual was “probably a juvenile” and that the gun was also “probably fake.” That information was not relayed to Loehmann or Garmback, however, “thus, the officers believed that they were responding to a playground where a grown man was brandishing a real gun at individuals, presumably including children,” the DOJ said.

When local prosecutors originally declined to charge the two officers, they noted that it was “extremely difficult” to tell the difference between the toy gun and a real firearm, also stating that Rice was large for his age – 5’7’’ and between 175 and 195 pounds – and could have been mistaken for an older person. There have been conflicting reports about Rice’s exact weight, however, with the DOJ putting him 20 pounds heavier than descriptions by media outlets.

Loehmann opened fire immediately upon arriving at the scene, shooting Rice mere seconds into the encounter as the officer attempted to jump out of his moving patrol car. Rice was struck once in the abdomen and died of his injuries the next day.

The department stated that in order to pursue federal civil rights charges, prosecutors must prove beyond a reasonable doubt that an officer “acted willfully to deprive an individual of a federally protected right.”

“This high legal standard – one of the highest standards of intent imposed by law – requires proof that the officer acted with the specific intent to do something the law forbids,” the DOJ went on.

It is not enough to show that the officer made a mistake, acted negligently, acted by accident or mistake, or even exercised bad judgment.

Though surveillance footage caught the officers’ interactions with Rice, the Justice Department said the “grainy” time-lapse video is “incapable of capturing the nuances of continuous action” and “does not show detail or perspective.” At one key point in the footage, Rice is said to have “made movements of some sort” that suggested his hands were “in the vicinity of his waist.” While the DOJ acknowledged the video does not show that Rice was drawing a weapon, it said the footage “also does not establish that [Rice] was not reaching for a gun.” Both Loehmann and Garmback maintain they believed the boy was moving for a firearm, giving what the department called “generally consistent” statements since the time of the shooting.

Besides two bystanders whose testimony was dismissed as “inconsistent,” the two officers were the only witnesses to the incident.

Of seven experts selected to review the case, four hired by prosecutors found Loehmann’s use of force “objectively reasonable,” while three others retained by the Rice family came to the opposite conclusion. But because they relied on the “poor-quality” video footage, the DOJ said their testimony “added little to the case.”

A state grand jury also previously mulled charges for Loehmann, but similarly declined to indict. While he faced few repercussions for the 12-year-old’s death, the officer was later fired after it was found that he lied on his job application to the Cleveland Police Department. Garmback, for his part, was suspended without pay for 10 days after the shooting.

Rice’s case – along with that of Michael Brown, an 18-year-old black man shot by police in Missouri the same year – fueled widespread anti-police brutality protests across the US, which were rekindled again this year after the death of George Floyd at the hands of officers in Minnesota. 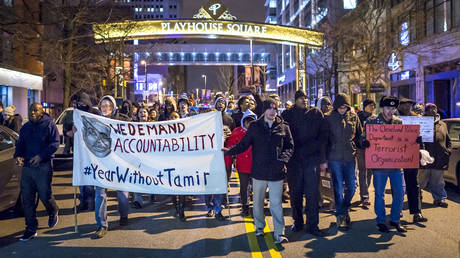 ‘A bit like royalty’: Prince Harry mocked for condemning ‘attack on democracy’ in US...