DUBAI, 24th December, 2020 (WAM) — DP World said it has signed agreement recently with the government of Senegal to develop a deep water port at Ndayane, located approximately 50kms from the existing port. The agreement is part of the 50-year concession for the Port of Dakar, which has two 25-year terms, starts once operations begin at the new port, according to the addendum to the existing concession of 2017.
Sultan Ahmed bin Sulayem, Group Chairman and CEO of DP World, said, “This will be DP World’s biggest port investment in Africa to date, and is a testament to our commitment to Senegal and belief in its potential for further economic growth. The new port will create jobs, attract new foreign direct investment to the country, and enable new trading opportunities that bring about economic diversification.”
The agreement was signed in Dakar by the Minister of Fisheries and Maritime Economy of Senegal, Alioune Ndoye and Sultan Ahmed bin Sulayem, Group Chairman and CEO of DP World.
DP World Dakar SA, the local joint venture company between DP World and PAD, will not only develop and operate the 300-hectare (ha) container terminal but also finance, design and develop the land and maritime infrastructure of the new 600ha port. The first phase of this project will see an investment by DP World Dakar of US$837m, which will make it the single largest private sector investment in the history of Senegal and is expected to be followed by a second phase of investment of US$290m.
The first phase of the Ndayane Container terminal will be operated alongside the existing DP World Dakar container terminal. The Senegalese Government’s vision supports the development of the Port of Ndayane as a site for the next 100 years of port activities. DP World will develop a special economic zone near Port of Ndayane to enhance Senegal’s attractiveness to foreign investors in West Africa. 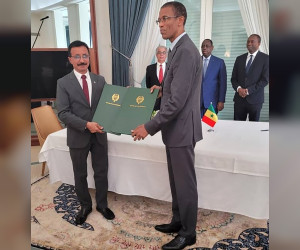 To prevent burnout, LinkedIn is giving its entire company the week off