DUBAI, 19th December, 2020 (WAM) — A report issued by the Business Registration & Licensing sector of Dubai Economy states that the emirate of Dubai has 401 companies in fisheries sector.
This reflects Dubai’s focus on strengthening the marine and aquaculture wealth as one of the pillars of economic, social and environmental development that contribute significantly to supporting national food security.
The companies that work in the fisheries sector cover diverse activities including: Fishing, Marine Animal Catching; Sea Based Aquaculture; Pearl Cultivation; Fish & Crustacean Farming; Land Based Aquaculture; Aquaculture Post-Harvest Services; Operations of Aquaculture Hatcheries; Fish & Seafood Canning & Preserving; Fish & Seafood Freezing; Fish & Seafood Processing Vessels; and Fresh Fish & Marine Animals Trading among others.
Established in 2013, Fish Farm is one of the leading fish farms in the UAE with a focus on marine fish breeding and hatchery to support the local aquaculture industry and reduce the UAE’s dependency on fish imports. The farm can produce five types of fish at the same time by providing the suitable environment.
Fish Farm produces nearly 30 per cent of the total domestic demand for sea bream, sea bass, hammour, salmon and the famous Japanese yellowtail king fish, which contribute to reducing dependence on imports to meet the market demand.
Bader Mubarak, Fish Farm Chief Executive, said: “We aim to provide the country with fish that are difficult to produce, as we started with sea bream, sea bass and hammour, and then focused on farming salmon. This is one of a kind initiative worldwide, and produce are currently available in all sales outlets. We have also added the famous Japanese yellowtail king fish.”
Mubarak added: “Our goal is not to compete with local fishermen but replace 92 per cent of fish imports in addition to encouraging entrepreneurs who want to explore this sector, by providing assistance through our team of consultants”.
Fish Farm actively contributes to enhancing the food diversity in the UAE by releasing fingerlings into the UAE’s waters and reserves to increase local fish wealth, contributing to the provision of alternative fish during breeding times. It also launches artificial caves in the UAE’s waters to provide a suitable environment for fish. Fish Farm has played a major role in meeting the needs of the Emirati market of fish over the past few months.
“We thank our wise leadership for the continuous support that motivates us to exert efforts in achieving the objectives of supporting food security in the UAE and building a new, different sector while creating jobs in this field. Fish Farm has three branches in Fujairah, Umm Al Qaiwain and Jebel Ali. Our branches and distribution lines employ 108 employees. Our total production reaches 3,000 tonnes annually of high-quality fish, which compete in quality with fish imported from their natural habitats,” added Mubarak.
Fish Farm in Jebel Ali area has 5 stations, each of which includes 8 tanks, which are managed with the latest technology and an integrated system that controls various factors such as temperature, salinity, oxygen, pH and currents, and other elements to ensure growing fish in an environment similar to their original one.
Fish behaviour is also monitored, as well as health status and activity level through cameras installed in all farm tanks. All fish produced by Fish Farm in Jebel Ali branch are 100 per cent organic. The fish are sold at local markets, hypermarkets, and cooperatives. 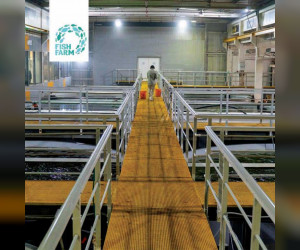