Space billionaire Elon Musk and singer Grimes have split up, Musk has announced, adding that they still “love each other, see each other frequently, are on great terms,” and will share care of their son. Cue social media meltdown.

The SpaceX tycoon and Tesla founder told entertainment-news website Page Six on Friday that, though the pair are “semi-separated,” they remain close – indeed, he said, she was currently staying with him, and “Baby X” was “in the adjacent room.” Baby X would appear to be Daddy’s moniker for X Æ A-Xii, the awkwardly named child the two welcomed into the world in May 2020.

Musk explained that his work was primarily in Texas or “traveling overseas,” while Grimes – real name Claire Boucher – was based in Los Angeles. The singer is reportedly filming a TV show for Fox called ‘Alter Ego’.

The end of the couple’s three-year relationship was a hot topic on social media, having been controversial – and epic meme fodder – since day one.

Grimes and Musk baby deciding who he wants to be with in court #ElonMusk #grimes pic.twitter.com/2RzHrHT1mk

Elon Musk and Grimes set to fork development of X Æ A-12 and run as two separate projects per GPLv3.

Some Grimes fans were pleased to see she’d dropped the billionaire.

listen i can only imagine how hard this is on the both of them considering they have a child together but,,, elon musk is scum 😌

if this is true it’s time to add those grimes songs back to my playlists 😗✌️ https://t.co/KsRl4GcUQB

Get that money from him. Do it for the planet and use it for good!

Musk fans also seemed relieved on his behalf that it was over.

Why would Elon Musk need Grimes when Tesla Bot is almost here. pic.twitter.com/9f76Uo602p

“The love between Elon Musk and Grimes burned bright and fast, just like the batteries on an exploding Tesla,” one Twitter user mused.

Others suggested the pairing had been a sociological experiment…

grimes dating elon musk was a three year sociological study conducted by havard university. we have now completed our study. thank you for your time

…or the breakup a PR stunt.

Happened across this. I have pretty much zero interest in Musk & I don’t even know who “Grimes” is (though I have a vague memory of them having a baby) but if they still “love each other” & “are on great terms” why are they “semi-separated”? What am I missing here? https://t.co/t0qfzLAIJC

More than a few felt bad for the child, who will forever drag around the name X Æ A-Xii.

It seems unfair that Grimes and Elon Musk get to break up after 3 years, but X Æ A-12 has to live with that name forever.

Elon Musk and Grimes are splitting up. Who gets custody of their wifi password?… i mean child. 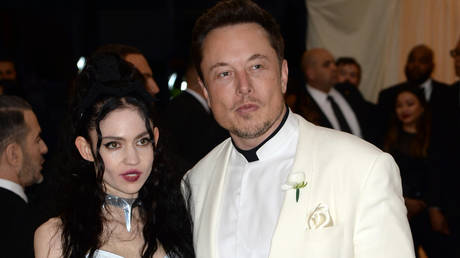 Belarusian leader heads to Russia amid showdown with EU