The therapy has been carried out on the twins by the Abu Dhabi based hospital who diagnosed them with a rare and most severe form of Spinal Muscular Atrophy – Type 1 (SMA1), a highly fatal disease.

After visiting Burjeel Hospital for a neurological assessment with Consultant Pediatrician and Child Neurologist, Dr. Hussein Matlik, the twin babies were diagnosed with the rare and devastating monogenetic neuromuscular disease, SMA1, which is also known as Werdnig-Hoffmann disease.

SMA is caused by a defective or missing survival motor neuron (SMN1) gene. The genetic disorder affects nerve cells that control voluntary muscles of the body resulting in the rapid and irreversible loss of motor neurons, affecting all muscle functions, including breathing, swallowing and basic movement. It leads to progressive muscle weakness, paralysis, and when left untreated in its most severe form, death.

“The symptoms of this devastating disease start manifesting in children in the first six months of their lives and if left untreated, the disease can lead to death or the need for permanent ventilation by the age of two in more than 90 percent of cases. The first consultation with the babies showed that they were severely weak, had hypotonia, as well as areflexia, which is the absence of neurologic reflexes. This led us to do a genetic test, and as a result, the SMA diagnosis test came back positive for both babies,” said Dr. Matlik.

He added, “Based on the available data, we are confident about the success of the therapy. This is a big achievement for the hospital, and also another success story for the UAE’s healthcare ecosystem.”

Under the supervision of Dr. Amro El Saddik, VPS Healthcare Excellence Director and his team, the infants were administered AVXS-101 (onasemnogene abeparvovec) gene replacement therapy. This potentially transformational therapy targets the root cause of the disease with a single dose that introduces a functional SMN1 gene to restore SMN protein expression.

Available data for previous administration of the therapy is reassuring, and shows that the treatment is both effective and safe.

Parents of the twins, Rashid Al Hasani and Mona Ali said they are optimistic about the treatment. “We are incredibly grateful to Dr. Matlik and the team at Burjeel Hospital for diagnosing our children so swiftly and offering this life-saving gene therapy treatment. We are feeling very positive, and we hope Allah is listening to our prayers and will shower his blessings upon our children and our family.” 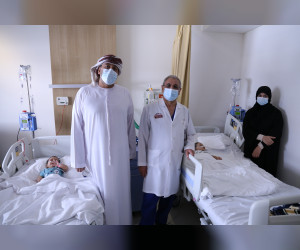