ABU DHABI, 10th January, 2021 (WAM) — H.H. Sheikha Fatima bint Mubarak, Chairwoman of the General Women’s Union (GWU), President of the Supreme Council for Motherhood and Childhood, and Supreme Chairwoman of the Family Development Foundation (FDF), today inaugurated the first virtual forum between the UAE and Saudi Arabia, held under her patronage and entitled, “Safe Family, Safe Community.”
The two-day forum was organised by the GWU, the Family Affairs Council (FAC) of Saudi Arabia, and the Saudi-Emirati Coordination Council.
During her speech at the event’s inauguration, which was delivered on her behalf by Noura Khalifa Al Suwaidi, Secretary-General of the GWU, Sheikha Fatima said, “I am delighted to welcome the honourable participants and thank the GWU in the UAE, the Family Affairs Council in Saudi Arabia and the organisers of the first virtual forum between the two countries, underscoring their deep ties that are based on solid historic foundations. We are confident that the joint initiatives between the UAE and Saudi Arabia will result in productive outcomes and solutions that will drive the process of sustainable social development in both countries, blessed by their leaderships that have exerted all possible efforts to reinforce their regional and international statures.”
“I am also delighted to commend the exerted efforts of the Saudi-Emirati Coordination Council, which represents a distinguished model of integration, cohesion and cooperation, led by His Highness Sheikh Mohamed bin Zayed Al Nahyan, Crown Prince of Abu Dhabi and Deputy Supreme Commander of the UAE Armed Forces, and His Royal Highness Prince Mohammed bin Salman bin Abdulaziz, Crown Prince, Deputy Prime Minister and Minister of Defence of Saudi Arabia,” she added.
“I am confident that the two-day forum’s participants will offer us the best ideas, work and academic and professional expertise, as well as the best practices and experiences of both countries, to support the quality of life portfolio,” she further added.
She concluded her speech by stating, “I wish you all success in advancing the families of our countries, in light of the support of their leaderships.”
Dr. Hala Al Tuwaijri, Secretary-General of the FAC, stressed that the forum reflects the strong ties between Emirati and Saudi families, noting that the leaderships of the two countries strongly support the reinforcement of family and social cohesion, through exchanging expertise concerning the best practices related to family stability.
She then thanked the leadership of Saudi Arabia for supporting families while pointing out that the GWU and the FAC share the same objectives, to serve families in both countries, and noting that the FAC aims to achieve significant progress in the process of social development in Saudi Arabia, under the framework of its serious organisational work aimed at empowering all segments of the community, to create a stable and prosperous community.
Al Suwaidi stressed that the launch of the forum is in line with the vision of the leadership of the UAE and Saudi Arabia to reinforce the foundations of family stability. 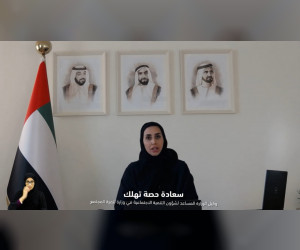