FBI solicits ‘tips’ on instigators of Capitol violence, gets bombarded with photos of GOP members, calls to probe Antifa & cops

Investigators at the FBI have asked the public for information on the instigators of violence at the US Capitol. If the public replies are any indication, agents will be sifting through hundreds of images of politicians.

Dozens of Trump supporters intruded into the Capitol on Wednesday, causing disruption to the US Congress’ count of the electoral votes cast in the presidential election. The FBI wants to know who sent the crowd through the police barricades, so it asked the public to help by “[submitting] any images, videos, or other multimedia files” related to the disturbance.

The FBI is seeking to identify individuals instigating violence in Washington, D.C. We are accepting tips and digital media depicting rioting or violence in and around the U.S. Capitol on January 6. If you have information, visit https://t.co/buMd8vYXzH.

The responses came in droves, and most of them probably won’t be helpful for the investigation. Some were simply copies of publicly available footage and images of the chaotic scenes unfolding, with a special focus on the most colorful characters in the protester mob.

Here. Look for this guy. Send out their pictures across the world with WANTED signs. You have a million images. POST THEM and mark them WANTED! pic.twitter.com/SZipAnu1K6

For the record, the individual in this photo is not named ‘Via Getty’, contrary to what some people on Twitter may believe.

Other commenters were as political as might be expected in a volatile situation like the one gripping the US. Images of Donald Trump, his cabinet, Republican lawmakers, and Rudy Giuliani were all popular submissions.

Here you go…I watched him on supporting overturning the election just before the insurrection. He may also be a serial killer. pic.twitter.com/UXzguGt2WI

I believe you can find this guy in the Russell Senate Building. pic.twitter.com/zfXLv7ZkVr

Some even helpfully provided the address where “the ringleader” lives.

Look first look in 1600 Pennsylvania Avenue. The prime suspect will be watching TV.

Then go to the US Senate and scream, “There is a live TV camera!” and suspects Josh Hawley & Ted Cruz will immediately run towards you.

A few responses suggested the FBI should also look into Antifa, referring to a theory that members of the radical left movement somehow infiltrated the MAGA rally and led the charge on the Capitol. No evidence that this was the case was offered, however.

There were also calls to investigate the reason why the protesters managed to enter the supposedly highly secure seat of the US federal legislator with virtually no resistance.

Large crowd storms the Capitol with little or no resistance, not a shot fired until they were inside. Explain to decent Americans why this wasn’t an inside job
Cops seen helping to remove barriers
Cops taking selfies with insurrectionists
Trump not calling for the National Guard 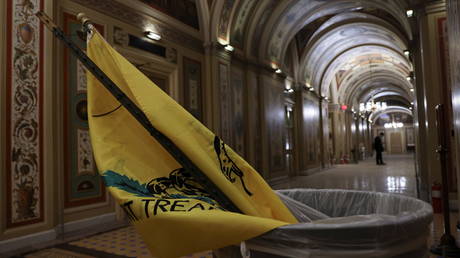