ABU DHABI, 5th January, 2021 (WAM) — At the fourth session of the second ordinary term of its 17th legislative chapter held today at its headquarters in Abu Dhabi, the Federal National Council (FNC) approved a draft federal law on regulating donations.
During the session, chaired by Saqr Ghobash, FNC Speaker, the Council highlighted the importance of organising, collecting and providing donations, as well as protecting donors’ funds, creating an attractive local environment for donations, and reinforcing the relevant coordination between federal and local authorities, noting that the law’s provisions will apply to any entity desiring to collect or provide donations in the country, including in free zones.
Ghobash stressed that the law is being issued as part of the UAE’s overall humanitarian efforts.
Under the draft law, donating to any individual or entity outside the country may only take place according to the controls and procedures highlighted by the law’s executive regulations.
The law also stipulates that any association or entity may only be called a “charity” or “humanitarian association” upon receiving a certificate of classification, barring the organisations and authorities whose decrees, laws, or resolutions of establishment confirm that they are called a “charity” or “humanitarian association.”
The FNC directed two questions to Nasser bin Thani Al Hamli, Minister of Human Resources and Emiratisation. The first question was on the establishment of the “Tadbeer Centre” while the second was on the ministry’s procedure related to working during a deprivation period.
The FNC received the written responses to these two questions while the response to a third question on the conditions related to the residency of professional athletes in sports clubs was postponed. 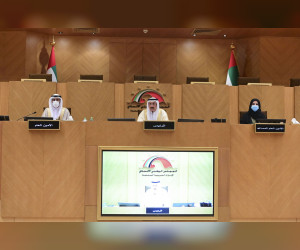