Ivory Hecker, a reporter with the Houston affiliate of Fox News, fired a surprising broadside at the network, accusing it of suppressing reporting that didn’t fit the desired narrative, and promising to expose it.

During a live report on Monday, Hecker alleged that “Fox Corp. has been muzzling” her and possibly other reporters “to keep certain information from you, the viewers.”

“I am going to be releasing some recordings about what goes on behind the scenes at Fox,” she said, pointing to the controversial conservative outfit Project Veritas. The material is supposed to be published by the outlet on Tuesday.

Project Veritas published the clip, as well as some extra footage, showing one of its journalists, Christian Hartsock, talking to Hecker, at what seems to be the same location she was giving her live report from.

“They sent a reporter out there. They don’t like what that person said. And they turn around and punish the reporter,” she said.

Does that make any sense? No. But I guess I am supposed to know the narrative and stick with it instead of sticking with the facts.

Project Veritas made its name by secretly recording people in various industries, including the media and Big Tech, and using their words to claim systemic bias against conservative voices in America. Critics accuse it of using sleazy tactics and deceptive editing of its tapes to make their case.

After Hecker made the allegations, the group’s name trended on Twitter, which Project Veritas hailed as yet another success. Its own Twitter account had been suspended in February “for repeated violations of Twitter’s private information policy.” 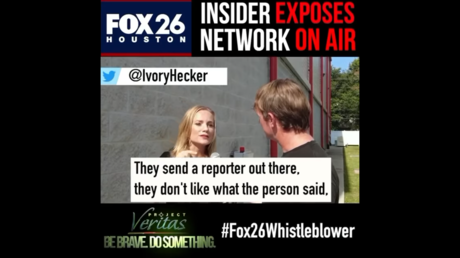 Crowd stones Texas gunman to death after he kills 1, wounds 3