A Georgia official who dismissed Donald Trump’s allegations of election fraud has claimed that his home address was used to cast an illegal ballot, but insists the incident is not evidence of wide scale irregularities.

Gabriel Sterling, the Voting System Implementation Manager for Georgia’s Secretary of State, revealed that a woman listed his address as her own when voting in the 2020 presidential election, and that she had also requested an absentee ballot, using the same incorrect address, for the state’s upcoming Senate runoff contest.

Sterling discovered the issue after he received a flyer from a national voting rights organization, Fair Fight. The notice reminded a voter named Meron Fissha to pick up her absentee ballot and urged her to return it “quickly to ensure your vote is counted.”

Fissha had sold her home to Sterling in 2018 and moved out of the state, according to the Georgia official. He said that after investigating the matter he discovered that Fissha requested that the ballot be mailed to her in Maryland, and that she had also voted by mail in the November 3 general election.

When contacted by a FOX affiliate in Atlanta, Fissha admitted that she had voted in Georgia but claimed that she still lives and works in the state. She said that she was in Maryland temporarily to help her brother with a medical issue and that she simply forgot to update her voter registration. Her brother corroborated the story, FOX 5 said. It’s unclear who she voted for and her party affiliation is also unknown, as such information is not included in voter registration in the Peach State.

The Fulton County Board of Elections voted 4-1 on Tuesday to pursue Sterling’s challenge, but the decision in his favor still irked the election official, who said it was “ridiculous” that one board member thought that his complaint “didn’t meet probable cause.”

Some people on social media argued that Sterling was overreacting to a benign paperwork slipup, but he countered by saying such incidents are not to be taken lightly.

Noting that Fissha had “over two years” to update her address, Sterling tweeted: “She illegally voted in races here…she signed a sworn oath saying she lived in my home. I followed the process available to me under the law…I challenged her ability to cast a legal vote.”

It’s over 2 years. over 2 full election cycles. She illegally voted in races here…she signed a sworn oath saying she lived in my home. I followed the process available to me under the law…I challenged her ability to cast a legal vote.

In another message he said that Fissha “potentially” violated “multiple laws” by casting and requesting ballots using an inaccurate address.

Registering to vote in Georgia while not a resident with no intent to come to the state is punishable by up to ten years in jail and a fine of up to $100,000.

Sterling has been an outspoken critic of claims of sweeping voting irregularities alleged by President Donald Trump and his allies. He described the rhetoric as dangerous and accused Trump of inciting violence.

In his most recent remarks, the Georgia election official noted the “irony” of the situation, but stressed that the case could not be compared to what Trump and his surrogates have alleged.

In one Twitter post, Sterling corrected his critics by explaining that he’s never denied the existence of isolated incidents of voter fraud.

“We’ve said illegal voting happens in all elections & steps need to be taken to stop it. Claims of Powell, Giuliani, etc of wide fraud are false/unsupported. Newsmax, et al forced to retract,” he wrote, referring to the Trump-allied attorneys who have been pursuing, unsuccessfully, allegations of voter fraud in court.

However, concerns about faulty registration data prompted Georgia to send letters to an estimated 8,000 people who requested ballots for the Senate runoff election in January, even though they indicated that they moved out of the state.

Georgia is one of several states flipped by Democrat Joe Biden after Trump initially enjoyed an early lead. Biden won the traditionally red state by less than 15,000 votes. State lawmakers are scheduled to hold a hearing on alleged election fraud and irregularities later this Wednesday. 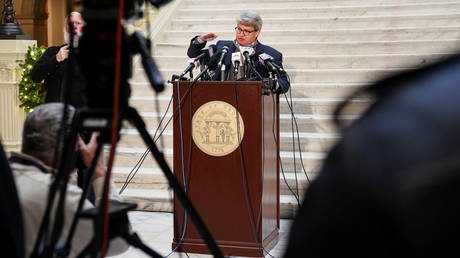