Tennessee Governor Bill Lee has asked President Donald Trump for an emergency declaration enabling use of federal resources to aid recovery from the Christmas bombing that rocked Nashville and took out communications networks.

“The severity and magnitude of the current situation is such that effective response is beyond the capabilities of state and affected local governments,” Lee said Friday in a letter to Trump. He noted that the resources of state and local governments were depleted after they spent more than $175 million in responding to disasters in 2019 and 2020, including tornadoes and floods.

I have requested an emergency declaration from @POTUS to support ongoing efforts and relief. pic.twitter.com/7vwrvN1FBw

An RV exploded early Friday morning in downtown Nashville in what police have called an intentional act. Three people were injured, and possible human remains were found near the blast site. Lee said 41 businesses were damaged, and the affected buildings – many of which are historic – will have to be assessed by engineers to determine whether they can be entered safely.

The RV was parked outside an AT&T transmission building when the bomb went off, knocking out landlines and mobile-phone services alike across Tennessee and in parts of Kentucky and northern Alabama, Lee said. The explosion also crippled 20 911 emergency call centers and damaged computer networks, forcing state systems to operate on backup infrastructure.

“The damage is shocking, and it is a miracle that no residents were killed,” Lee tweeted after touring the area on Saturday morning.

AT&T acknowledged that telecommunications services remained disrupted on Saturday in Nashville and the surrounding areas. Two portable cellular systems were deployed downtown, and AT&T engineers drilled access holes to the damaged building to attempt to reconnect critical equipment to electricity.

“Please start reporting on how AT&T customers have no communication with the outside world,” one Twitter user said.

Please start reporting on how ATT customers have no communication with outside world – no phone, internet, tv, etc. – at a store for wifi now to see what’s happening. No @ATT letting news sources know what’s going on and estimated time to restore??? TN Families in dark.

Police reportedly haven’t identified either a target or a motive for the bombing, which occurred after the RV blared a recorded warning that it would detonate in 15 minutes.

A “person of interest” related to the RV has been identified by investigators, CBS News said, citing an unidentified law enforcement official. The person was described as a 63-year-old male and a Nashville-area resident

Nashville Mayor John Cooper called the “deliberate” explosion a “one-off event.” The Federal Aviation Authority has temporarily declared the skies within one nautical mile of the bombing site “national defense airspace,” meaning that “deadly force” could be used if it is violated. Flight restrictions will be in place through 4.45pm local time on December 30.

The FAA has classified the airspace around Nashville bombing scene as “National Defense Airspace,” saying “deadly force” could be used against violators. pic.twitter.com/L0S0hUDS9g

Nashville Police Chief John Drake credited six officers for rushing in to evacuate residents before the bomb went off. The officers went door-to-door, evacuating apartments, and alerted a man who was walking his dog on the street where the RV was parked just before the blast occurred.

‘ACTS OF HEROISM’ These Nashville police officers ran into danger and evacuated residents before an RV explosion downtown, saving lives. “These officers didn’t care about themselves…They cared about the citizens of Nashville.” https://t.co/kVsVR1uCTF

State and local emergencies were declared on Friday, and a curfew is in effect in downtown Nashville until 4.30pm on Sunday. 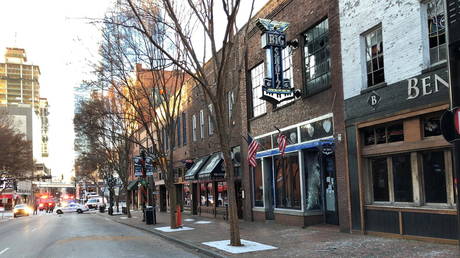