After numerous sightings throughout 2020, Los Angeles’ intrepid “jetpack man” has made yet another appearance, this time captured on film flying some 3,000 feet above California by pilots on a training flight.

The Sling Pilot Academy took to Instagram on Wednesday with the footage after baffled instructors caught what appeared to be a man in a jetpack whizzing around thousands of feet in the air near Palos Verdes, south of LA. The object – or person – passed along the right side of the craft and, as quickly as it arrived, blasted off into the distance.

The apparent jetpacker made no attempt to communicate with the pilots, and no chatter about the strange sighting was heard on the typically crowded radio channel used by the instructors, one of the pilots told the War Zone, which first reported on the new video.

While the instructors said they notified the Federal Aviation Administration (FAA) about the incident, with scant details to offer, no official report was ever filed with the agency. In a statement to the War Zone, the FAA said it had not “received any recent reports from pilots who believe they may have seen someone in a jetpack in the skies around Los Angeles,” adding that it takes such reports “seriously” and has worked with the FBI to investigate previous jetpack sightings.

The outlet also reported that the FAA would soon contact the flight school “directly” to investigate further, though a review of radar tapes from around the time of previous jetpack sightings revealed nothing “abnormal.” To date, no witnesses have come forward to report seeing a jetpacker taking off or landing.

The Sling Academy noted, however, that what appeared to be a daredevil in a jetpack may have instead been “a drone or some other object,” and that it remained to be seen whether the incident had any relation to previous reports around LA.

First spotted in September over the Los Angeles International Airport – one of the most crowded airspaces in the world – the elusive jetpacker has bewildered aviation and law enforcement authorities alike, with both the FAA and FBI coming up empty after an extended investigation. In one previous case, a China Airlines crew reported seeing the man at an altitude of 6,500 feet, over a mile in the air with no lifting surfaces. What type of device the man used is unknown, as few jetpacks are able to achieve such heights – but with just about everything else surrounding the jetpacker remaining an enigma, the sightings rank among the most puzzling mysteries of 2020, rivaling the series of bizarre monoliths appearing (and then disappearing) all over the globe earlier this year. 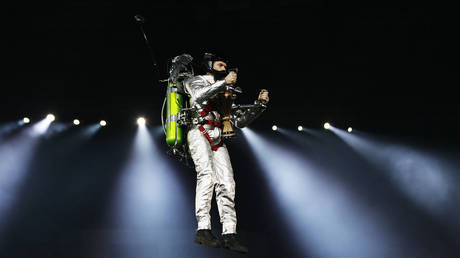 US won’t share Covid-19 vaccines with Mexico as Americans must be inoculated first –...