SHARJAH, 24th December, 2020 (WAM) — A high-level delegation of UAE ministers recently visited the Sharjah Research Technology and Innovation Park (SRTI Park). They witnessed the important role of the Park in strengthening innovation, scientific research and use of technology to achieve the UAE’s vision of a knowledge-based economy.

The ministers were given a tour of the newly-opened SRTI Park headquarters as Al Mahmoudi explained and gave details of the various technology sectors operating inside the SRTI Park, with special focus on water technology, environmental technology, renewable energy, transportation technology, information technology, industrial design and architecture, and other enterprises that promote innovation.

Al Mahmoudi noted that the Park is designed according to the best practices and highest international standards in modern technology parks that is conducive to creativity and innovation.

Al Mahmoudi added more than the world-class infrastructure and services, the Park promotes Research and Development (R&D) and supports enterprise activities by engaging the triple helix of collaboration among the industry, government, and academia.

He also shed light on SRTI’s most prominent accomplishments, its future plans, the regional and international companies at SRTI Park, and their research projects that provide solutions and innovations in various fields.

The ministers visited the Sharjah Open Innovation Lab (SoiLAB). Launched as the first incubator for start-ups and innovative business, SoiLAB promotes innovative ideas that will bring technical advancement and entrepreneurship to the highest international levels in Sharjah.

The space is open to students, artists, entrepreneurs and tech enthusiasts and provides access to a diverse range of equipment from 3D Printers to metal and wood working machinery and caters for individual and collaborative efforts.

Al Mahmoudi also showcased the first 3D-printed fully-functional villa in the Middle East built at the Park. He said the villa was finished in just two weeks, and it involved a large research programme between different universities, especially the American University of Sharjah, in collaboration with the private sector and some international universities in Finland and research institutions in the Netherlands as well as other countries.

In a statement, Abdullah bin Touq Al Marri, Minister of Economy, affirmed that the UAE, under the guidance of its wise leadership, continues its efforts to build the future economy according to the foundations of knowledge, innovation and technology, and the development of research and development and digital applications.

He also praised the vision of His Highness Sheikh Dr. Sultan bin Muhammad Al Qasimi, Member of the Supreme Council and Ruler of Sharjah, in the transfer and localisation of knowledge to enable Emirati competencies and engage in technological investment and support.

For his part, Dr. Ahmed Belhoul Al Falasi, Minister of State for Entrepreneurship and Small and Medium Enterprises, added: “The Sharjah Research, Technology and Innovation Park is one of the most important research facilities that support the innovation culture in the UAE.

“There is no doubt that the Park’s initiatives and activities represent a valuable addition that supports the ability of companies In the country, especially the small and medium-sized entities to adopt innovative models and appropriate research and academic directions that enhance their ability to continue and overcome economic stagnation and even achieve growth and take advantage of new and emerging opportunities,” he said.

In addition, Dr. Thani bin Ahmed Al-Zeyoudi, Minister of State for Foreign Trade, also praised SRTI Park’s programmes and the concrete projects and initiatives it has achieved that have reflected on the business and investment environment in the country with the presence of a large number of companies investing in innovative technologies.

“It gives a positive indication of the sustainable development that can be achieved in the qualitative investment and the creation of competencies in the country, in a way that enhances its vision towards strengthening the foundations of the new economy.

“What we have witnessed at Sharjah Research, Innovation and Technology Park supports the state’s efforts to keep pace with these modern trends, as it focuses on establishing new practices and future sectors and directing investors and businessmen towards these sectors during the next phase,” he added.

In response, Al Mahmoudi, for his part, said: “We are also proud to continue with our mission to intensify efforts and make SRTI Park an important hub of regional and international development for future technologies.

“Our role is to link the efforts of the private sector, governmental bodies, and academic institutions to support scientific, applied and technological research to carry out investment activities and realise the UAE’s vision of a knowledge-based economy.” 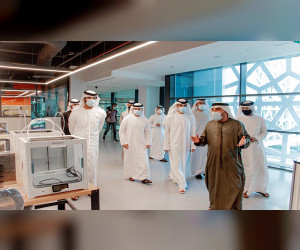