ABU DHABI, 22nd December, 2020 (WAM) — The International Court of Arbitration of the International Chamber of Commerce (ICC Court) and Abu Dhabi Global Market (ADGM) announced the opening of a case management office for the ICC Court Secretariat in Abu Dhabi.

The case management office will be located at ADGM, a leading international financial centre located in the capital.

The establishment of the new case management office is very timely, given that the UAE ranked 8th and 9th in 2018 and 2019 out of 142 and 147 countries respectively for the most frequent nationalities among parties involved in ICC-administered arbitrations.

The existing activities of the ICC Middle East and North Africa (MENA) representative office, established in ADGM in 2017, will be integrated into the Secretariat’s new case management structure, as agreed by ICC and ADGM.

Offering world-class dispute resolution services in ICC Arbitration to users in the Middle East, the Gulf and beyond, the new case management team aims to commence operations in April 2021. This will be the Secretariat’s fifth overseas opening after Hong Kong (2008), New York (2014), Sao Paolo (2017) and Singapore (2018).

ICC and ADGM have committed to collaborating on joint promotional activities, as well as training and educational programmes to strengthen the standards of arbitration and dispute resolution services in the MENA region. Both organisations will also facilitate the hosting of arbitration hearings and other meetings at the state-of-the-art hearing centre, the ADGM Arbitration Centre, which will be made available for ICC arbitrations. As part of their ongoing commitment to the region, the ICC Court will host a number of key meetings, conferences and trainings at ADGM, including ICC Court sessions, the 2021, 2023 and 2025 ICC MENA conference, trainings designed by the ICC Institute of World Business Law, Dispute Resolution Services workshops for companies incorporated in ADGM, ICC Young Arbitrator Forum events and many others. This collaboration will also lead to a career path for UAE Nationals from an internship programme to potential employment as deputy counsel.

ICC Court President, Alexis Mourre, said, “The setting up of the ICC Court’s office in ADGM will create an extraordinary platform for the development of our offering in the region. The new case management office will contribute to the development of ADGM’s reputation by offering dispute resolution services of the highest standards to users in the region and beyond.”

Linda Fitz-Alan, Chief Executive and Registrar of the ADGM Courts, said, “Since the opening of the ICC’s MENA representative office in 2017, both the ICC and ADGM have driven growth and support of arbitration in the region. The expansion of the ICC Court’s footprint is testament to the increasing attraction of Abu Dhabi as a global destination for international dispute resolution.”

Essam Al Tamimi, Chairman, Al Tamimi & Co, said, “The establishment of an ICC case management office in ADGM is an exciting and welcome development. The opening of the office speaks volumes about ADGM’s dedicated and successful effort to become a key dispute resolution hub on a regional and global scale and to the ICC’s commitment to the development of international arbitration in the Middle East region.”

Dr Habib Al Mulla, Executive Chairman and Head of Dispute Resolution Practice of Baker McKenzie Habib Al Mulla, commented, “Choosing the UAE as the new market for the establishment of ICC Court’s office is an important and prudent step for ADGM, the UAE and the Middle East region as a whole. As disputes are becoming more frequent and complex, having an office in the UAE means the services of the Court’s Secretariat will directly be available to parties, their counsel and arbitrators in this jurisdiction as well as surrounding regions.”

Alex Bevan, Partner, International Arbitration, Shearman & Sterling stated, “The establishment by the ICC Court of a case management team on the ground is an important milestone for ADGM in particular, as it continues to lead the way in the development of arbitration services in the Middle East, and also for regional arbitration more generally.”

ICC arbitration is widely used in the greater MENA region where, in 2019 alone, more than 310 parties engaged in arbitral proceedings under the ICC Arbitration Rules. As an international financial centre, ADGM is the first jurisdiction in the region to directly apply English common law. It has a pro-arbitration framework, modelled on the UNCITRAL Model Law. Parties may elect ADGM as a seat of arbitration. Where the legal seat of the arbitration is ADGM, ADGM Courts have a supervisory role under ADGM’s arbitration framework. ADGM arbitral awards are enforceable under the New York Convention in more than 150 countries and multi-lateral and bilateral treaties with certain countries. 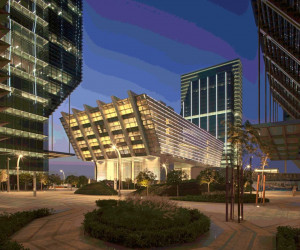