Insurrection Act nullified in latest coronavirus bill? Wrong, it was sneaked into legislation back in summer, Twitter discovers

Congress’ Covid relief bill is packed full of under-the-table provisions, but does it really include a line restricting President Trump’s ability to deploy the military? No, but lawmakers managed to sneak that one in elsewhere.

President Donald Trump said on Tuesday that he’ll veto the long-awaited Covid-19 relief bill, calling its provision for $600 stimulus checks to American citizens “a disgrace,” alongside billions of dollars for foreign countries – $1.3 billion to Egypt, $700 million to Sudan and $500 million to Israel, for example. The president said he would send the bill back to congress, asking for $2,000 checks, and the removal of other “wasteful and unnecessary items.”

One partisan passage doing the rounds on Twitter on Wednesday was an amendment that nullified the president’s use of the Insurrection Act to quell domestic lawlessness with the military. The act was used by George H.W. Bush to send marine and army units into Los Angeles to crack down on race riots there in 1992, and some conservatives had urged Trump to do the same this summer, as violent protests and arson overtook numerous American cities following the death of George Floyd.

Exposed: In the 5,893 page stimulus bill that Trump plans to veto is an ammendment that “Nullifies the President’s use of the Insurrection Act.” #InsurectionAct #Stimulus pic.twitter.com/YppEzdM6ct

The recent bill is a hefty one, amounting to more than 5,500 pages. As Senators voted to pass the bill only a few hours after receiving it from the House of Representatives, it was up to commentators and pundits to actually read the text and find its most egregious inclusions – such as its provision of tax credits for racehorse owners and a clarification of the US stance on the reincarnation of the Dalai Lama.

The Insurrection Act amendment, however, was not one of them. Held up as an example of partisan pork, the amendment, clearly an attempt to curtail Trump’s powers, never featured in the coronavirus relief bill.

Hey idiots going off about the Insurrection Act, the amendment in question was part of the NDAA, not the covid relief (it also got dropped in the senate) Check the date btw – July 20, 2020 pic.twitter.com/0jqukbqSaz

Instead, it managed to find its way into the 2021 National Defense Authorization Act (NDAA), a yearly military spending bill that regularly becomes a vehicle for attaching obscure and unpopular legislation to. Written by Texas Rep. Veronica Escobar (D), the amendment passed the house in July, in a party-lines vote of 215-190.

The final version of this year’s NDAA, which passed the Senate earlier this month by 84 votes to 13, also includes provisions that would prevent Trump from withdrawing US forces from Afghanistan without congressional approval and allow for the renaming of military bases bearing Confederate names. Trump has promised to veto the bill unless these provisions are removed, and a passage is included repealing Section 230 of the Communications Decency Act, which shields social media companies from legal action over content posted on their platforms.

The NDAA is usually introduced in mid-summer, debated and amended over several months, and signed into law by the president in December – in this case a month before the end of Trump’s term in office. The inclusion of a passage forbidding the use of the Insurrection Act, therefore, is curious, and suggests that at the time it was written, Escobar and her fellow Democrats were under the impression that Trump would win re-election.

The NDAA passed the Senate with a veto-proof majority, meaning should Trump veto the legislation, lawmakers could simply override his decision. The Covid-19 relief bill, however, now is expected to return to Congress for further work. House Speaker Nancy Pelosi on Tuesday said she agreed with Trump’s demand, and stated that “Democrats are ready to bring this to the Floor this week by unanimous consent.”

While the relief bill turned the spotlight on wasteful government spending, packing these bills with pork is the norm in Washington, not the exception. In his yearly Festivus Report, Republican Senator Rand Paul (Kentucky), a spending hawk, highlighted some of the worst offenders. Among them were grants to the National Institute of Health that saw $37 million being spent to keep Filipino youth in school, $1.5 million to the National Science Foundation to walk lizards on a treadmill, and more than $6 million to National Cancer Institute researchers to develop a “smart toilet” prototype.

Adding up everything Paul considered “wasteful” would have bought every American a brand new 40 inch flatscreen TV, or funded the Treasury Department for three entire years. 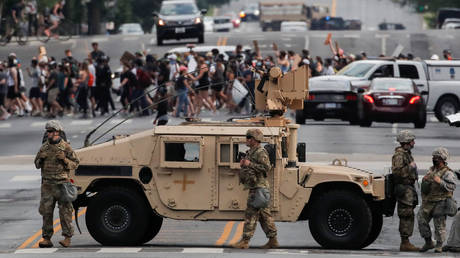