CBS’ ‘60 Minutes’ is being accused of deceptively editing a video of Florida Governor Ron DeSantis to fit a pay-to-play accusation involving Covid-19 vaccines and the Publix grocery store chain.

The much-maligned segment from the news program features a clip of reporter Sharyn Alfonsi directly asking DeSantis at a press conference if Publix, the largest grocery store chain in the state, had been given a vaccine distribution contract in exchange for a donation to his campaign.

The video aired by CBS, however, cut out a large portion of DeSantis’ explanation of how Publix came to be distributing vaccines. The segment showed the governor calling the accusation a “false narrative” and going back and forth with the reporter, who seemed to insist it was a “pay for play” situation. Not shown was the governor explaining that CVS and Walgreens were busy dealing with long-term care facilities, leaving Publix as the best option, especially for seniors.

Also dropped from the CBS segment was DeSantis explaining that distribution through Publix was done on a trial basis through three counties. The contract then expanded after they received “100% positive” feedback.

“What you’re saying is wrong,” Gov DeSantis tells Sharyn Alfonsi in response to a question about whether the Publix grocery store chain gained influence through a campaign donation on his behalf. “It’s wrong. It’s a fake narrative,” he says. https://t.co/gyrW9hYPTg pic.twitter.com/5rBq7v5VOA

It isn’t just editing that is fueling criticism of CBS, though. Publix released a statement on Monday blasting the segment about their connection to DeSantis.

“The irresponsible suggestion that there was a connection between campaign contributions made to Governor DeSantis and our willingness to join other pharmacies in support of the state’s vaccine distribution efforts is absolutely false and offensive,” Publix said, noting they have distributed more than 1.5 million vaccines and have done similar work in others states like Tennessee and Virginia.

Republican DeSantis has defenders on both sides of the political aisle. Former Florida state representative Jared Moskowitz, who is a Democrat and director of emergency management, has also disputed the pay-to-play accusation.

Moskowitz tweeted on Sunday evening that the governor and his office never recommended Publix for any contract, calling the story “absolute malarkey.”

@60Minutes I said this before and I’ll say it again. @Publix was recommended by @FLSERT and @HealthyFla as the other pharmacies were not ready to start. Period! Full Stop! No one from the Governors office suggested Publix. It’s just absolute malarkey. https://t.co/obkqYcbrzt

Another Florida Democrat, Palm Beach County Mayor Dave Kerner, also released a statement on Saturday, blasting the CBS segment as “intentionally false” and saying the network “should be ashamed.”

Palm Beach County (Democratic) Mayor Dave Kerner: “I watched the 60 Minutes segment on Palm Beach County last night and feel compelled to issue this statement. The report was not just based on bad information — it was intentionally false.” https://t.co/pscThUQ4r5 pic.twitter.com/28LC23x7UC

In light of the information not given through their reporting, ‘60 Minutes’ has been accused of using “deceptive editing” in the service of targeting DeSantis, who has been critical of many Covid-19 restrictions, and painting him in a negative light as his national profile rises.

“Is there any wonder why people don’t trust the media?” tweeted conservative filmmaker Dinesh D’Souza.

“Ultimately the best evidence that they have nothing on DeSantis is that their attempts to take him down are so embarrassingly bad that Florida Democrats are outraged by them,” Tablet Magazine editor Noam Blum added.

Can’t wait to see your report on @NYGovCuomo… https://t.co/DhL52nke5D

It is legitimate insane that that this company has to release a statement like this because of a deceptive report and deceptive editing from a major media news company. https://t.co/yUFm5wflYd 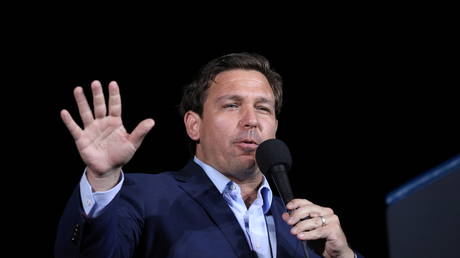 ‘Selling out democracy’? Activists call for boycott of Toyota for supporting ‘sedition’ after donation to Republicans

Brunswick 5-year-old who’s battled cancer gets ‘key to the city,’ surprise superhero parade for his birthday

Over 1000 athletes to take to mat at Grand Slam Abu Dhabi Rio de...