ABU DHABI, 11th January, 2021 (WAM) — Juma Inad Saadoun, Iraqi Minister of Defence on Monday visited Wahat Al Karama, Abu Dhabi’s national and cultural landmark, that commemorates the sacrifices and heroic deeds of the UAE martyrs to defend their homeland and protect it.
Upon his arrival, Saadoun was welcomed by Sheikh Khalifa bin Tahnoun Al Nahyan, Executive Director of the Martyrs’ Families’ Affairs Office, at the Abu Dhabi Crown Prince’s Court.
He attended the Guard of Honour ceremony, then laid a wreath at Martyrs’ Monument, which is made up of 31 massive aluminum-clad tablets each leaning on the other, signifying the unity, solidarity and mutual support that bind together the leadership, the citizens and the servicemen who protect them.
During the tour, he listened to a detailed explanation by Sheikh Khalifa bin Tahnoun about the different sections in Wahat Al Karama, which embodies the bravery and heroism of UAE martyrs, as well as the nation’s noble values.
The tour ended by a word written by Iraq’s Defence Minister expressing his utmost respect and appreciation of the brave martyrs of the UAE. 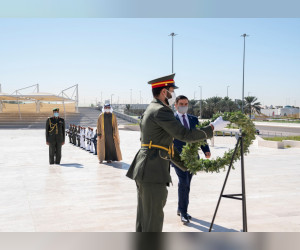