SHARJAH, 5th January, 2021 (WAM) — Irthi Contemporary Crafts Council, an affiliate of the NAMA Women Advancement Establishment, has broadened the global appeal of the UAE’s timeless, indigenous craft traditions through collaborations with entities at the forefront of the international design and cultural landscape.
Teaming up with Dezeen, an influential architecture and design magazine and digital platform, Irthi showcased a selection of its product line integrated with Emirati craft traditions such as Talli and Safeefah and other international crafts on the digital portal which receives three million-plus monthly visitors from around the world.
In a virtual panel discussion hosted by Dezeen last month, Irthi also revealed how, under the directives of Her Highness Sheikha Jawaher bint Mohammed Al Qasimi, wife of the Ruler of Sharjah and Founder and Royal Patron of Irthi Contemporary Crafts Council, it has been supporting and championing women artisans through craft and empowering them through a programme of creative partnerships and commercial collaborations.
At the live-streamed virtual panel discussion titled, “The role of contemporary design in preserving local crafts and empowering women artisans”, Farah Nasri, Irthi’s Assistant Manager of Curation and Design, underlined the entity’s efforts in re-contextualising the craft traditions of the UAE and adapting it to the needs of the modern-day market to ensure the long-term and sustainable economic empowerment for women artisans and to preserve these crafts for the future.
The session, moderated by Dezeen’s Editor-in-Chief, Marcus Fairs, also featured three UAE-based creatives who worked together with the Emirati craftswomen for the Council’s premier collection. Faysal Tabbarah, Co-founder of Architecture + Other Things, Abdalla Almulla, Architect and Founder of MULA, and jewellery designer Alia Bin Omair shared insights on the collaborative process with the artisans and discussed the value of pairing traditional craft forms with contemporary design practices.
Irthi Contemporary Crafts Council joined Design Miami, a global authority for collectable design, with a two-part programme in 2020. The Council made its first appearance on the virtual marketplace of Design Miami for an exclusive online sale of its limited-edition handmade products by artisans and international artists and designers.
Reem BinKaram, Director of NAMA, said, “These partnerships are vital in creating a new ecosystem for handmade crafts through stimulation and innovation in design and take forward Irthi’s agenda of providing a fresh narrative for women, by developing new market opportunities.”
Taking its collaboration with Design Miami further, and in line with its efforts to preserve the cultural heritage of the MENASEA and Central Asia regions, Irthi led an inspiring conversation with Lebanese creatives last month, to shine a light on Beirut’s moveable and immovable cultural heritage that is in immediate need of safeguarding.
The discussion titled, “Reviving Beirut Through Heritage Conservation” explored the need to support craft, design, and architecture practices as the city continues its rebuilding efforts following the August blast.
Farah Nasri moderated the discussion with architect Bernard Khoury, designer Nada Debs, and Tessa and Tara Sakhi of Beirut-based multidisciplinary studio T SAKHI. 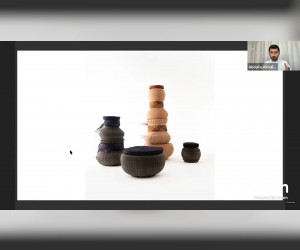