A Kentucky man has become a social media sensation after using what appears to be a flamethrower to melt the blanket of snow on his driveway.

Kentucky was fortunate to have a white Christmas, with parts of the state receiving as much as nine inches of snow by the early hours of December 25. The wintery weather undoubtedly added to the festive mood of the holiday, but it also required residents to get out their snow shovels… or flamethrowers, in the case of one unidentified legend.

A homeowner in Ashland, a city located in the state’s northeast, was filmed by a presumably surprised onlooker as he massacred the snow on his driveway using a handheld flame-throwing device.

Here’s one way to do some quick snow removal, by flamethrower. Video taken by Jordan Podunavac in Ashland, KY. @NWSCharlestonWV @spann #KYwx pic.twitter.com/DylxR1r3D2

“Here’s one way to do some quick snow removal, by flamethrower,” read the caption of the video, which was tweeted at the National Weather Service.

The footage, taken from across the road, shows the man blasting the snow with his flame-launching weapon as several cars pass by. As if knowing he was being observed, at one point he raises the gung-ho snow-removal tool towards the sky and fires a stream of flames into the air.

A local meteorologist, Chris Bailey, dug up a screenshot which he claims shows the same snow-melting marvel. In the photo, a man in a white nightshirt is seen smoking what appears to be a cigar as he wields a large flamethrower.

It gets even better. Snow hating flamethrower man was dressed as Cousin Eddie from Christmas Vacation. pic.twitter.com/ER1Eams0MY

The footage was widely praised as one of the most ‘Kentucky’ things ever recorded on camera. Locals were especially proud to share the same hometown as the mysterious flame-shooting hero.

Of course, shooting flames at snow was not invented last week. The internet appears to be overflowing with photos and videos of people torching the frigid white powder. 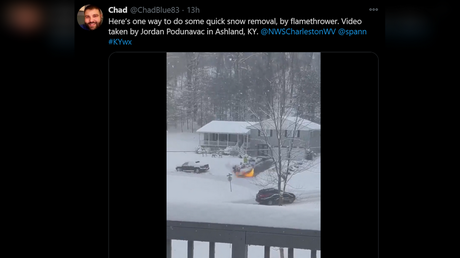