In the wake of the Capitol Hill riot, two of America’s most prominent journalists want to “deprogram” President Donald Trump’s supporters and make them feel the “consequences.” Their words led to some uncomfortable comparisons.

“There are millions of Americans, almost all white, almost all Republicans, who somehow need to be deprogramed,” Washington Post columnist Eugene Robinson said on MSNBC on Tuesday morning, in an appearance with New York Times reporter Nikole Hannah-Jones and host Joe Scarborough. “It’s as if they are members of a cult,” Robinson declared, asking Hannah-Jones how Trump’s voters could be purged of their Trumpism.

WaPo’s @Eugene_Robinson to @nhannahjones: How do we “deprogram” Trump supporters? pic.twitter.com/LnFrAd6NXZ

Hannah-Jones is the reporter responsible for the Times’ ‘1619 Project’, which reframes the history of the US as the continuous march of white supremacy. Though criticized for its historical inaccuracy, the 1619 Project has already been taught in public schools as fact.

Needless to say, Hannah-Jones had some radical suggestions. “There has to be consequences, and then…people have to take a second look at their actions, and they have to be much more afraid to do the types of violence that we saw last week,” she said.

Online, conservatives raged at the apparent calls for retribution. “You guys would be quite the hit in 1930s Germany,” one commenter wrote, while another predicted that “this blatant racism is going to end in disaster.”

I don’t need to be deprogrammed from wanting to keep America free thanks https://t.co/jOxYgQI98s

Consult with the CCP. It has quite a successful “reprogramming” operation underway. https://t.co/vCnKhA1HHV

Robinson and Hannah-Jones aren’t the only anti-Trump voices calling for a draconian crackdown on the president’s ‘Make America Great Again’ movement, a bloc of 75 million voters.

Journalists have called for a “cleansing” of Trump’s movement, and urged liberals to name and shame their Trump-supporting friends and family members. Trump supporters have been booted en masse from social media, and some of those who moved to alternate platform Parler have had their information hacked and exposed by activists. Trump’s staff have been threatened with excommunication from the professional world by Forbes magazine, while numerous lawmakers and activists have begun compiling lists of Trump’s supporters and “enablers” with the aim of shunning them from polite society.

President-elect Joe Biden has repeatedly stressed his desire to “unify” the polarized US electorate and build a “presidency for all Americans.” However, he has not yet given any indication of how he intends to do this. Biden immediately condemned the Capitol riot as “domestic terrorism,” and promised to implement punitive new laws to prevent it happening again. In a speech following the riot, he delved into the same themes of racial division explored by Robinson and Hannah-Jones. Instead of a blanket condemnation of those who broke the law last Wednesday, Biden mused on whether the rioters would have been treated differently if they were black. 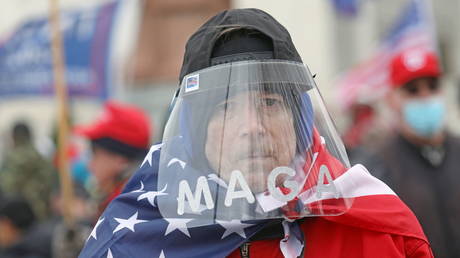