Local Press: UAE’s vaccine strategy protects those who protect us

ABU DHABI, 17th January, 2021 (WAM) — At the beginning of last year, as the danger of Covid-19 dawned on the world, people rallied around frontline health workers, whose hard work offered us a rare glimmer of hope in desperate times, observed a UAE newspaper on Sunday.

“We cheered them on during weekly applause, donated to charities that supported them and even named pop-up facilities in honour of medical pioneers. These actions were largely symbolic, often emotional gestures of gratitude for the sacrifices they were making,” said the English daily The National in its editorial.

Society’s thanks is important. But it is not enough to physically protect those who keep us safe. For that, medical staff need proactive government support, the newspaper pointed out.

The UAE, as with much of its Covid-19 response, has done better than most other developed nations. Friday’s news that health workers in Dubai would now be receiving their second and final doses of the Pfizer vaccine is the latest success in protecting the nation’s medical staff. It is an achievement that represents a vote of thanks in their hard work. Frontline health workers can now continue their mission, with a far greater degree of safety. This comes on top of other good news. On January 10, the UAE’s National Emergency Crisis and Disaster Management Authority announced that all medical staff in the country had received the first dose of vaccines, explained the daily.

On a more general level, 133,253 people were vaccinated between last Wednesday and Thursday, meaning that the local distribution rate of doses in the country has now risen to 15.45 for every 100 people, the National said.

Effective government planning and the logistical success of the vaccine rollout have made this possible, as well as the continued efforts of the nation’s health workers, be they doctors, nurses, volunteers, administrators, receptionists or the hospital porters who make up the complex patchwork of the country’s medical sector, the editorial noted.

With more frontline workers now on the cusp of being fully inoculated with both doses, healthcare professionals, with confidence in their safety, can push on in the next stage of the country’s vaccination programme: inoculating enough people to achieve herd immunity. The WHO has said that global resistance to the virus will not be possible by the end of the year. But in the UAE, it is still achievable, the newspaper said.

Medical staff have born a heavy burden during the pandemic. They have worked round the clock, enduring the mental strain of comforting the seriously ill and the dying. Some frontline staff have even lost their lives. The rare occasions of this ultimate sacrifice have been honoured at the highest levels of government. Sheikh Mohamed bin Zayed, Crown Prince of Abu Dhabi and Deputy Supreme Commander of the Armed Forces, has personally called families of fallen healthcare workers. Sheikh Mohammed bin Rashid, Vice President and Ruler of Dubai, honoured them during last year’s Commemoration Day, the daily noted.

Not all of us can thank these heroes at public ceremonies. But we can do so by sticking to hygiene guidelines and getting vaccinated, the editorial concluded. 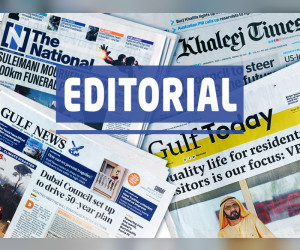