Joining the episode from Jakarta, Indonesia, Mohamed Jameel Al Ramahi, Chief Executive Officer of Masdar said: Masdar and its Indonesian partners recently kicked-off South-East Asia’s largest floating solar PV project and one of the largest in the world. This is a tremendous step for a nation that relies heavily on coal and diesel generation, but this is only the beginning.

“We can expect a new approach from the US administration on energy priorities, while there is optimism that clean technologies will take the lion’s share of the stimulus package the world needs after Covid-19 – to get people back to work and re-ignite economic activity.”

This year, Masdar made its second strategic investment in the US market to acquire a 50 percent stake in eight utility-scale projects across Nebraska, Texas and California. Strategic partnerships have been central to Masdar’s global success, with the company deploying nearly 11GW of capacity in over 30 countries.

Carlos Pascual, Senior Vice President for Global Energy at IHS Markit said, “The global movement to Net 0 emissions will send national governments into a hyper-regulatory period to meet the commitments of about 125 countries that, with the addition of the Biden Administration, will cover 66% of global emissions. Investment incentives and flows for energy producers and financial investors will shift profoundly toward clean energy. For Masdar and the United States, the opportunities to partner on technology and innovation will be unprecedented.”

The ADSW Web Series provides a year-round global platform for maintaining dialogue on issues and topics that are shaping the global sustainability landscape.

Registration is now open for the ADSW Summit, which will focus on the pillars of “Live & Move”, “Care & Engage”, and “Work & Invest” – with each pillar exploring social, economic and technological opportunities to achieve a ‘green recovery’ post COVID-19.

ADSW 2020 welcomed 45,000 attendees from over 170 countries, including the UAE’s leadership, 10 heads of state, 180 international ministers, and over 500 representatives from the world’s media. 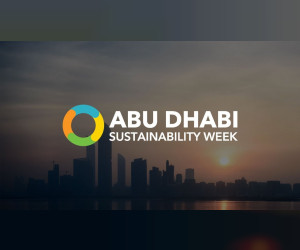 Design firm had ‘no idea’ CPAC stage resembled Nazi symbol, but takes responsibility after liberal conspiracy spirals out of hand

Design firm had ‘no idea’ CPAC stage resembled Nazi symbol, but takes responsibility after liberal conspiracy spirals out of hand