DUBAI, 3rd January, 2021 (WAM) — The Board of Trustees of the Mohammed bin Rashid Al Maktoum Creative Sports Award, which is a Mohammed bin Rashid Al Maktoum Global Initiative, has thanked the country’s wise leadership for the support they provided to the different segments of the community, as well as to different countries in the face of the COVID-19 pandemic, which made 2020 a challenging year in every sphere of life, including sports.
The Board of Trustees also confirmed the implementation of the directives of H.H. Sheikh Hamdan bin Mohammed bin Rashid Al Maktoum, Crown Prince of Dubai, Chairman of Dubai Executive Council and patron of the award, and H.H. Sheikh Ahmed bin Mohammed bin Rashid Al Maktoum, President of the National Olympic Committee and Chairman of the Award, in developing action plans and launching initiatives that contribute to the return of sports activities and provides a platform for athletes to improve their levels and aim for the podium at different international tournaments, especially with the Tokyo Olympics taking place this summer.
This came during the 29th meeting of the Board of Trustees, which was held virtually via video conferencing. Mattar Al Tayer, Vice Chairman of Dubai Sports Council and Chairman of the Board of Trustees of the Award, headed the meeting, which was also attended by Khalid Ali bin Zayed, Vice Chairman of the Board of Trustees, and the members of the Board, including Dr. Hassan Moustafa, Dr. Khalifa Al Shaali, Mustapha Larfaoui, Moaza Al Marri, Secretary-General of the Award, Ahmed Alosaymi, Muna Busamra, and Nasser Aman Al Rahma, Director of the Award.
Al Tayer emphasised that this meeting comes after a year of challenges that faced the world in general and sports in particular, putting the world of sports on hiatus around the globe. However, the award, he said, encourages and enables the creative athletes to achieve their accomplishments by instilling a spirit of creativity, and through cooperation with various sports institutions, international federations, and Olympic and Paralympic committees.
Participants at the meeting also reviewed reports of the standing committees of the award, namely the Technical Committee, the Arbitration Committee, the Communication and Marketing Committee, as well as plans to organise different events during the lead up to the Award Ceremony, which will be held in January, 2022. 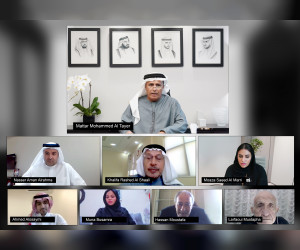