DUBAI, 27th December, 2020 (WAM) — In his capacity as Ruler of Dubai, His Highness Sheikh Mohammed bin Rashid Al Maktoum, Vice President and Prime Minister of the UAE, has approved the Government of Dubai’s general budget for the fiscal year 2021, with total expenditures of AED57.1 billion.

The newly-announced budget takes into account the exceptional economic conditions of the fiscal year 2020 and the repercussions of the COVID-19 pandemic on the global economy. It also confirms Dubai’s ability to deal with the crisis, restore the pace of economic growth, strengthen social benefits and essential services and adopt policies that achieve growth, economic stability and financial sustainability in the medium and long term. The 2021 budget also demonstrates continued efforts to develop revenues, raise the spending efficiency and increase the level of private sector engagement.

Dubai’s new budget will continue to support social, health, educational and cultural services as well as investments in infrastructure services in the emirate, as part of the objective of making Dubai one of the world’s best cities to live in.

Abdulrahman Saleh Al Saleh, Director-General of the Department of Finance of the Government of Dubai (DOF), said that Dubai’s Strategic Plan 2021 is a key pillar in Dubai’s journey towards the future. He further highlighted Dubai Government’s success in implementing programmes that aim to achieve structural, economic and financial reforms, in addition to launching initiatives to diversify the economic base.

“These programmes and initiatives have contributed to stimulating the growth of local GDP, which played a vital role in enhancing the resilience of the local economy during the pandemic. Investment in the technical infrastructure enabled the government and the private sector’s rapid response to business transformation,” Al Saleh added. Highlighting the impact of the pandemic on public finances, particularly in terms of declining revenues, Al Saleh said this led to measures being taken by the government to decrease operational spending and strengthen investment spending.

Economic incentives issued under the directives of H.H. Sheikh Hamdan bin Mohammed bin Rashid Al Maktoum, Crown Prince of Dubai and Chairman of Dubai Executive Council, to support the business sector in the emirate, have contributed to achieving institutional agility through structuring the government to achieve financial sustainability.

“Initial estimates for 2021 suggest that GDP will see four per cent growth, supported by continued recovery of economic activities. The government will continue to enhance the role of the private sector so it can serve as one of the main engines of economic growth,” said Arif Abdulrahman Ahli, Executive Director, Planning and General Budget Sector at DOF. “We will also continue to support SME’s in conjunction with the government’s continued implementation of structural reforms aimed at diversifying the economy, improving the business environment and opening new horizons for domestic and foreign investment.”

“The 2021 budget comes in response to the requirements for recovery and dealing with the postponement of Expo 2020 Dubai. It also reflects the emirate’s financial stability through its implementation of financial policies as per best global practices. DOF seeks to develop programmes that aim to raise government spending efficiency and promote partnerships with the private sector. Additionally, it also seeks to constantly develop the budget and review its implementation,” Ahli continued.

Dubai government is expected to achieve public revenues of AED52.314 billion, despite the economic incentive measures adopted by the government that would reduce some fees and freeze the increase in fees, and the decision to not impose any new fees without providing a new service.

These revenues are based on ongoing operations in the emirate and do not rely on oil revenues. Oil revenues account for 4 per cent of the total projected revenues for the fiscal year 2021. This is in addition to developing the government revenue structure, which will enhance financial sustainability.

Jamal Hamed Al Marri, Executive Director of the Central Accounts Sector at DOF, said, “We spare no effort in consolidating the competitiveness of the emirate’s government. We are keen to develop programmes that improve public financial performance and achieve financial excellence. Dubai Government’s success in expanding smart financial collection applications enabled it to become more agile in dealing with the repercussions of the pandemic. Implementation of international accounting standards in the public sector had a significant impact in supporting the government decision-making process, ensuring the continuity of financial efficiency, and improving the quality and comprehensiveness of financial reports, in line with the Dubai Strategic Plan 2021.

“DOF continues to promote the digital transformation in Dubai government through new programmes prepared, launched and implemented with the relevant government entities, including Al Khazna, ALMAS, Bawabatech and Bayan, among others.”

The fiscal year 2021 budget announcement sends a clear message to the business community that Dubai is pursuing an expansionary fiscal policy, which contributes to strengthening confidence in the emirate’s economy and attracting more direct investments. The budget serves the requirements of population growth and the benefits resulting from hosting Expo 2020 and the continuous development of the infrastructure. It also supports the goals of the Dubai Plan 2021. The government seeks to expand the outsourcing of services to the private sector to enhance its engagement in economic development, which will contribute to improving the wellbeing and happiness of citizens and residents.

Salary and wage allowances of the 2021 budget account for 35 per cent of total government spending, in accordance with the requirements of the new human resources law, to ensure family and community stability. Grant and support expenditure account for 26 per cent in order to meet the requirements of human and community development and provide public services to the residents of the emirate.

The government has approved 9 per cent of the total expenditure to maintain the volume of investments in infrastructure, in line with Dubai’s aspirations to be the world’s most preferred destination to live in. This comes alongside the completion of some projects, the activation of the public-private partnership law and the development of project financing mechanisms in Dubai government through long-term financing.

The budget of the fiscal year 2021 reflects the government’s commitment to the people, who are the real wealth of the nation, as indicated by His Highness Sheikh Mohammed bin Rashid Al Maktoum. The approach taken by the emirate to combat the COVID-19 pandemic reflects the government’s keenness to ensure the health and safety of the community. Dubai and the UAE became among the first countries to receive the COVID-19 vaccines.

Government spending in the social development sector in areas of health, education, housing, women and children’s care, as well as developing reading and coding initiatives, represents 31 per cent of total expenditure.

The government’s concern for security, justice and safety sees 22 per cent of the total expenditure allocated to support and enable this sector to perform professionally and proactively. This sector has become one that the emirate prides itself on in the global arena.

Dubai’s keenness to develop its infrastructure and transportation has led to an allocation of 41 per cent of total spending to the sector. This reflects its commitment to dealing with future commitments, supporting entrepreneurship and creating an incubator environment for enterprises. 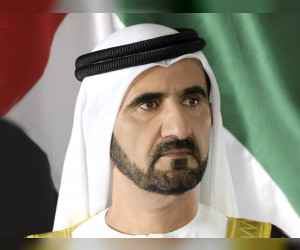