Influential televangelist Pat Robertson has advised Donald Trump to “move on” from trying to overturn the results of the election. He was instantly ridiculed online for saying back in October that God told him Trump would win.

“I had prayed and hoped that there might be some better solution, but… I think it’s all over,” Robertson said on his show The 700 Club on the Christian Broadcast Network.

Robertson said it would be “a mistake” for Trump to run again in 2024, suggesting that former South Carolina governor and former US envoy to the UN, Nikki Haley, would be a better option for the GOP.

“You know, with all his talent and the ability to raise money and grow large crowds, the president still lives in an alternate reality. He really does,” Robertson stated about Trump. “It would be well to say, ’You’ve had your day. It’s time to move on.”

Robertson’s words were seen by many online as another example of Trump’s strong backer now bailing on the president and throwing him “under the bus” by acknowledging his election defeat to Joe Biden.

Pat Robertson tells Trump to give it up… Biden won.
Happy to admit that I had #HellFreezesOver on my 2020 Bingo card pic.twitter.com/fQcBtmDp1P

Another wrote, it was “pretty amazing that #PatRobertson is a voice of reason right now.”

Trump’s supporters, meanwhile, blasted the conservative preacher for being “spineless.”

PRO TIP: Never, ever get in a foxhole with Pat Robertson or Franklin Graham.

Similar accusations had been earlier hurled at Senate Majority Leader Mitch McConnell for congratulating Biden after the Electoral College voted for the Democrat over Trump on December 14.

Robertson’s stance was ridiculed by some because in October he claimed to have received a revelation from God that Trump was going to be reelected “without question,” and his victory would be “a given.”

Bless his heart. Next he’ll be proudly announcing that the good Lord has informed him that the earth is round and water is wet. Baby steps ….

“Did he admit that god was wrong tho?” a person wrote online.

“For someone all knowing and powerful god sure does make is minions backpedal a lot,” another said. 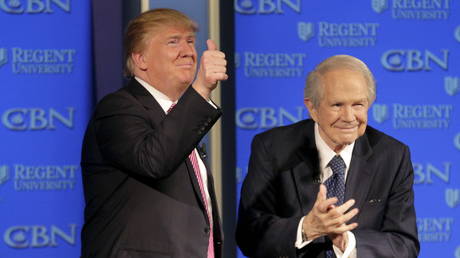