Nancy Pelosi is re-elected as US House speaker after AOC and other ‘Squad’ members swallow hard, avert giving gavel to Republican

Nancy Pelosi has been re-elected as US House speaker, overcoming division with Alexandria Ocasio-Cortez and other left-wing lawmakers as Democrats were forced to consolidate behind her to avoid handing the gavel to a Republican.

At one point in Sunday’s floor vote, House Minority Leader Kevin McCarthy (R-California) led Pelosi (D-California) at 189-187, with three members voting “present” and two choosing others, giving Democrats some nervous moments. “Can you please explain to me how they could’ve given us a Republican speaker?,” one Twitter user asked.

Ocasio-Cortez (D-New York) and other progressives, such as Cori Bush (D-Missouri), had yet to vote, leading to speculation on whether given the number of absences in the House, they could vote against Pelosi without jeopardizing her winning the election over McCarthy.

Two other members of the so-called “Squad” of left-wing House members, Ilhan Omar (D-Minnesota) and Ayanna Pressley (D-Massachusetts), then voted for Pelosi. Ocasio-Cortez later followed them, giving Pelosi a clean sweep of the Squad and nearly clinching her victory. The final margin was 216-208, giving the 80-year-old Pelosi her fourth term as speaker.

The decision by AOC and like-minded progressives to back Pelosi has sparked accusations of them selling out to the establishment, prompting calls for a third party from disenchanted supporters.

The entire #Squad voted for #NancyPelosi. That includes incoming progressives.

Tweets praising them for abstaining were premature.

A third party is necessary.

I was an active donor to progressives when I could be. No more.

The Democratic Party in its current form is wholly toxic and once it has you, it corrupts you.

Bowman and Bush capitulated instantly. AOC’s 1st vote was for Pelosi too.

Sorry Nina. If you run 3rd party, hit me up.

Ironically, Omar had sent out a message hours earlier with a picture of six Squad members and the caption, “Unbought and unbossed.” After the vote, podcast host Jimmy Dore mocked her, tweeting, “Ha! Nancy Pelosi is your boss.”

Nancy Pelosi is your BOSS. https://t.co/WuyX6e9VmX

Self-described “social justice warrior” Christine Hansen scolded Omar, saying, “Really? Is that why you voted for Nancy Pelosi for speaker? You and the rest of the Squad (except Cori Bush) are huge disappointments.”

Really? Is that why you voted for Nancy Pelosi for Speaker? You and the rest of “the squad” (except Cori Bush) are HUGE disappointments.

Facing pushback from some of her devotees, Ocasio-Cortez defended her vote by saying that with Republicans trying to overturn President-elect Joe Biden’s election victory, “This is not just about being united as a party. It’s about being united as a people who have basic respect for the rule of law,” she said, according to Bloomberg reporter Erik Wasson.

Some observers still stood by Squad members, given the dreaded alternative of having a Republican in charge.

@AOC thank you for doing the right thing and voting for Pelosi. We need her in that position now

Others said they felt betrayed, or that they may even support Republicans. “I am revoking all of y’all’s progressive badges,” one commenter said. “You can hand them in and exchange them for the leash Pelosi will have you on for the next few years.”

I am revoking all of yalls progressive badges. You can hand them in and exchange them for the leash Pelosi will have you on for the next few years. Jokes aside, i am extremely disappointed in #thesquad . If yall wont make a stand now, you never will. 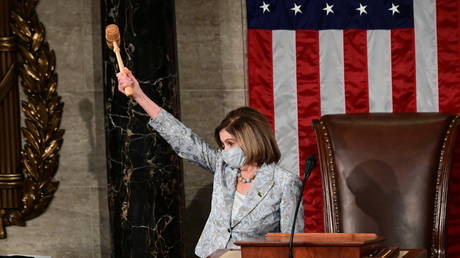