President Trump’s days in office may be numbered, but that hasn’t stopped his most ardent critics from gazing one last time into the crystal ball and predicting a fascist takeover by the Republican president, evidence be damned.

From repeated accusations of his “white supremacy,” to allegations that he’s been in bed with Moscow since the 1980s, facts have often taken a back seat to reality during the most breathless coverage of Donald Trump’s presidency. While such alarmist rhetoric has emanated mostly from online #resistance types and the fringes of the Democratic party, the so-called ‘Never Trump’ Republicans aren’t above stooping to baseless hyperbole about the president.

Bill Kristol is a case in point. An architect of the Iraq War, Kristol is a spokesman for a form of Republicanism that’s the antithesis of Trump’s: neoconservative and interventionist. Kristol’s recent opposition to Trump has earned him plaudits from liberals and regular guest slots on MSNBC.

With Trump set to leave office in a month, Kristol took to Twitter on Wednesday to predict a violent end to the year. According to Kristol’s unnamed sources, who in turn spoke to people “on the inside” of the Trump administration. The president’s firing of Attorney General William Barr possibly foreshadows a Christmas Eve coup d’etat by Trump.

1. This thread is based on recent conversations with people whose information and judgment I trust, who in turn have spoken candidly with Trump appointees still on the inside.

Here’s a question: Why did Trump and Barr, when they negotiated Barr’s departure, settle on Dec. 23?

Barr is set to leave the Justice Department on Wednesday, and to Kristol, this date coupled with Trump’s recent appointment of loyalists to key Pentagon positions and his rumored impending firing of White House counsel Pat Cipollone, all point to an incoming power grab by the embattled president.

Kristol suggested that Trump may attempt to seize voting machines to prove that Joe Biden’s victory was fraudulent, or even send the military into the streets via “various types of Insurrection Act-type moves.”

“All of these alarms, one hopes and trusts, will come to nothing,” Kristol mused. “And the coup, in the end, will fail. But that something more than we’ve seen so far won’t be tried–of that people aren’t so confident.”

Kristol’s assertions were based on hearsay at most, yet a cohort of pundits took them seriously. Among them were Vox’s Aaron Rupar, CNN contributor Julian Zelizer, and David Corn, who holds the dubious honor of being the first news editor to write up the ‘Steele Dossier’ – the debunked sheaf of anti-Trump gossip that helped kickstart the ‘Russiagate’ investigation.

In this thread, @BillKristol ponders a Christmas coup—or something worse than we’ve already seen. https://t.co/VB2h5mNUZX

This is a disturbing thread https://t.co/kOZxrbOUEx

Chilling thread from @BillKristol. So has POTUS found his Robert Bork? https://t.co/c3GFQ9i1UV

Kristol has been spectacularly wrong in his predictions in the past, from claiming the Iraq War would last two months, to saying that Barack Obama didn’t stand a chance against Hillary Clinton in 2008, as well as that Clinton would crush Trump in 2016. As he made yet another forecast, likely his last piece of anti-Trump punditry before Biden’s inauguration in January, only a handful of commenters hammered him for his history of hoodwinking readers.

“It is genuinely astonishing that after all these years, and all the outright lies Kristol has told, that gullible people treat his claims about secret conversations he had with anonymous sources — ones which *always* perfectly coincide with his political agenda — as credible,” journalist Glenn Greenwald tweeted.

It is genuinely astonishing that after all these years, and all the outright lies Kristol has told, that gullible people treat his claims about secret conversations he had with anonymous sources — ones which *always* perfectly coincide with his political agenda — as credible. https://t.co/padkWSb3RX

Trump still maintains that Biden’s victory was fraudulent, and achieved through computer “glitches” and the counting of illegal votes in a number of key swing states. The president has not indicated that he will use the military to remain in office, and attention on his final days in the White House has instead focused on the presidential pardons he will likely issue.

Trump kicked off a predicted wave of pardons on Tuesday evening, granting clemency to 15 people, including former campaign aides, Republican lawmakers, and mercenaries convicted of war crimes. On the left and the right, calls have intensified for the president to pardon WikiLeaks founder Julian Assange and National Security Agency whistleblower Edward Snowden, both of whom have been charged with espionage over the revelations they made public. 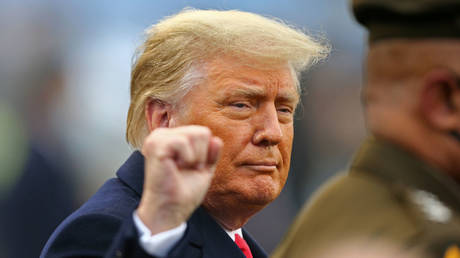 Conservative host posts about his investigation into voter fraud claims, gets blocked, challenges Twitter to disprove his findings