Senator Pat Toomey (R-Pennsylvania) has set off critics by claiming a House select committee probing January 6 is a political stunt to benefit Democrats – but Speaker Nancy Pelosi hit back, insisting it’s all about patriotism.

“What does it say about your party that an investigation into a violent insurrection would reflect poorly upon it?” CNN’s Jake Tapper asked Toomey during a Sunday interview.

The House committee investigating the January 6 Capitol riot has quickly become a contentious issue for Republicans and Democrats, with Republican House Minority Leader Kevin McCarthy even recently vowing to boycott the committee after two of his picks were denied by Pelosi.

“I would favor a truly bipartisan commission,” Toomey said in defense of his party, noting the numerous investigations into January 6 that are already underway.

The motivation to investigate the riot that day, however, is not what is driving these investigations, according to Toomey.

“I think we should be candid about the fact that it is politically to the advantage of Democrats to keep this issue at the forefront,” the senator said.

The Pennsylvania Republican later added that it’s “very clear” Democrats “have an incentive to drive a political message” through a “partisan commission.” Such investigations, he said, are to keep the focus away from the current policies of President Joe Biden.

“Which is more relevant in 2022?” he rhetorically asked.

GOP Sen. Pat Toomey says investigating Jan. 6 “is politically to the advantage of Democrats, to try to keep this issue in the forefront” and argues “it is a constant reminder about a terrible episode in our history … rather than looking at the policies of the current President” pic.twitter.com/jlT8qk6V4t

Toomey’s attack on Democrats over their focus on the Capitol riot got him trending shortly after his interview, with liberals quick to defend their party and turn the blame on Republicans who have been reluctant to fully support efforts to ‘investigate’ January 6. Many also celebrated the fact that Toomey will soon be retiring from the political world and leaving his seat open, quite possibly to a Democrat.

An insurrection without prosecution is a test run.

Dear Pat Toomey:
We need to not only acknowledge that the insurrection was a bad part of our history but we need to find out if those who enabled the insurrection are still in our Congress. If they are, they need to be prosecuted. #cnnsotu https://t.co/pTgS2niKbZ

Over 500 people have been arrested in connection with the Capitol riot and the FBI expects to identify hundreds more for prosecution. While Republicans have been eager to move on, there is no sign that will be happening, as even FBI Director Christopher Wray admitted last month, “This is far from over.”

On Sunday, Pelosi defended the select committee and claimed it would be bipartisan, despite friction with Republicans, and claimed the investigation would find “the truth” about the riot.

“Maybe the Republicans can’t handle the truth, but we have a responsibility to seek it to find it and in a way that maintains the confidence of the American people,” she told ABC.

When asked by @GStephanopoulos whether her decision to veto two Republicans from Jan. 6 select committee could fuel more division in the country, @SpeakerPelosi says: “Maybe the Republicans can’t handle the truth, but we have a responsibility to seek it.” https://t.co/jcVvXOzoSx pic.twitter.com/fJ60twbmoE

“It’s all about patriotism,” she added, “not partisanship.” 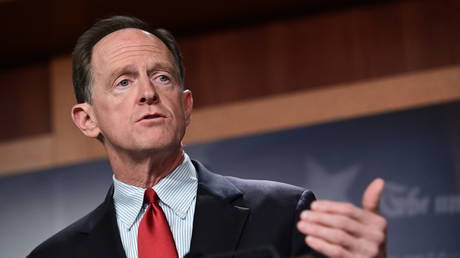 Caitlyn Jenner says she’ll only debate Newsom: ‘The only opponent’