One of two suspects in a mass shooting that injured 14 people in Austin, Texas, has been apprehended, but the local newspaper is continuing to withhold the alleged shooter’s description to avoid “perpetuating stereotypes.”

Austin police offered no details on the arrest, other than saying that it was done with the help of a US Marshals task force. Mention of the arrest was tacked on to an earlier statement regarding the Saturday morning shooting, which described the alleged shooter. It’s not clear whether that description applies to the man who was arrested or to the suspect who remained at large as of Saturday evening.

The Austin American-Statesman said in an editor’s note beneath its coverage of the shooting that it declined to publish the description provided by police, saying it was “too vague at this time to be useful in identifying the shooter, and such publication could be harmful in perpetuating stereotypes.”

But the description included several details that set the suspect’s appearance apart from the vast majority of Austin’s population – potentially a safety benefit for local residents. Police clearly considered it worth telling the public, saying one of the suspects was a “black male with dreadlocks, wearing a black shirt and a skinny build.”

Many social media users said the media outlet was putting its political agenda ahead of public safety. “They are literally putting people’s lives at risk just to be politically correct,” one commenter said. “I bet if their children were in that area, they would tell them to stay away from anyone matching the description.”

so they are literally putting people’s lives at risk just to be politically correct. unbelievable. i bet if their children were in that area they would tell them to stay away from anyone matching the description.

The Republic of Texas biker rally was being held in Austin this weekend, drawing thousands of bikers to the city’s bar district, where the shooting occurred. The newspaper chose to emphasize that fact, potentially planting misleading seeds about rowdy bikers in the minds of some readers – even though the police said there was no immediate information suggesting that the biker gathering played any role in the shooting.

“This does appear to be an isolated incident between two parties,” Austin Police Department Interim Chief Joseph Chacon said. “Most of the victims were innocent bystanders.”

No one should be subscribing to the Austin @Statesman. Period.

They care more about being woke than actually keeping the people of that city safe. There was a shooting with 13 people hit…but they won’t share a description of the gunman because racism…or something.

Even without a police description, the editor’s note allowed Twitter users to narrow down the suspect’s appearance. “When you know the shooter is definitely not white,” podcast host Scott Greer quipped.

CNN will also not provide the description of the shooter. They found this important to put in their article.

“One thing is clear – greater access to firearms does not equal greater public safety.”https://t.co/IxhutvGj80

Other media outlets, such as CNN, also excluded the shooter’s description from their coverage, but unlike the American-Statesman, they didn’t explain the omission to their audiences.

Texas state Representative Jared Patterson, a Republican, said the American-Statesman editor who decided to hide the shooter’s description should be “fired on the spot.” He added, “Police have released a description. Get it out to the public.”

The editor who made this call should be fired on the spot. Police have released a description, get it to the public!

“…one, or multiple suspects involved. There is one suspect described as a black male, with dread locks, wearing a black shirt and a skinny build.” https://t.co/PQZp8r2X7a 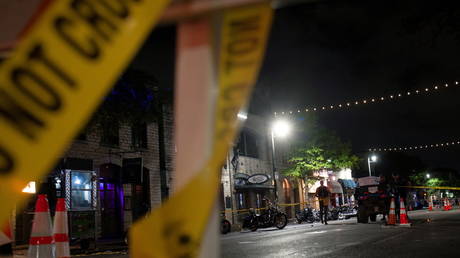 ‘It was sucking her away’: Alabama family forms human chain to save sister as...

Explosives set off to bring down rest of collapsed condo