Justice Clarence Thomas has promised the power social media platforms have over speech will soon need to be legally addressed, just as the Supreme Court dismissed a lawsuit over Donald Trump’s Twitter account.

With Trump no longer in office and deprived of access to his Twitter account, the Supreme Court tossed an appeal on Monday pushing back against a lower court ruling that Trump’s account was a public forum and he could therefore not individually block critics.

In a 12-page opinion, however, Justice Clarence Thomas used the opportunity to point out legal issues he sees in the level of power social media companies currently hold.

🚨Clarence Thomas suggests that social media companies may NOT have a First Amendment right to regulate speech on their platforms, analogizing them to “common carriers” and “places of public accommodation.” https://t.co/2zx7nCtIAz pic.twitter.com/ZleTE1aI0S

“Today’s digital platforms provide avenues for historically unprecedented amounts of speech, including speech by government actors. Also unprecedented, however, is control of so much speech in the hands of a few private parties,” he wrote, warning that “we will soon have no choice but to address how our legal doctrines apply to highly concentrated, privately owned information infrastructure such as digital platforms.”

Thomas specifically targeted Facebook CEO Mark Zuckerberg and Google co-founders Larry Page and Sergey Brin for their massive decision-making power in deciding what speech does and doesn’t belong on their platforms.

Social media companies currently hold the power to take down posts or suspend or terminate accounts they deem as violating their rules, but there has been a recent push to declare the companies ‘common carriers’ that must allow anyone on their platforms, regardless of views, especially if certain government accounts are public forums and release vital and sometimes emergency information.

“It seems rather odd to say that something is a government forum when a private company has unrestricted authority to do away with it,” Thomas argued, referring to Trump’s account and noting that Twitter had already exercised its authority “to do exactly that.”

While the Second Circuit Court of Appeals had previously ruled that Trump blocking users was a violation of the First Amendment, since his account is a public forum, Thomas pushed back and argued that social media companies like Twitter still have the right to block users from commenting on certain posts made by the former president if they decide the post needs to be restricted.

“The Second Circuit feared that then-President Trump cut off speech by using the features that Twitter made available to him,” Thomas argued. “But if the aim is to ensure that speech is not smothered, then the more glaring concern must perforce be the dominant digital platforms themselves. As Twitter made clear, the right to cut off speech lies most powerfully in the hands of private digital platforms.”

Thomas’ arguments have predictably split opinion, with conservatives critical of social media companies praising the judge for recognizing that platforms should be held accountable, while more liberal critics have mostly dismissed his opinion as defending fellow conservatives.

Clarence Thomas just created the beginning of the end for Twitter.

Thomas himself was recently at the center of a controversy involving Big Tech, with a documentary featuring the judge, ‘Created Equal’, being pulled from Amazon without any explanation to the distributor or filmmaker. Critics were quick to blast Amazon for pulling the movie allegedly for political purposes, as the film painted many liberal politicians, like President Joe Biden, in an unflattering light as it went through Thomas’ life and career.

“They have the right to pull anything from their site and they don’t have to give an explanation,” filmmaker Michael Pack told the Wall Street Journal about the removal. “So it’s not a contract violation. But many people have complained and they haven’t put it back up.” The film remains unavailable on the company’s streaming service. 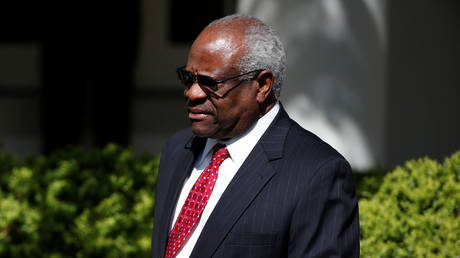 ‘Selling out democracy’? Activists call for boycott of Toyota for supporting ‘sedition’ after donation to Republicans

Brunswick 5-year-old who’s battled cancer gets ‘key to the city,’ surprise superhero parade for his birthday

Can I be required to get vaccinated against COVID-19? The facts explained