Politico is being branded as misogynistic by Democrats, including media figures, for daring to report on the millions of dollars that incoming Treasury Secretary Janet Yellen made in Wall Street speaking fees.

Yellen, whom President-elect Joe Biden chose as his nominee for Treasury chief in November, made more than $7.2 million in speaking fees from Wall Street banks and other large corporations in the past two years, Politico reported on Friday. Yellen, who stepped down as Federal Reserve Bank chairwoman in 2018, brought in nearly $1 million from speeches given for Citibank and more than $800,000 from hedge fund Citadel.

Politico noted that financial disclosures filed by Yellen and two other Biden Cabinet picks could erode support from left-wing Democrats. But the party faithful were circling the wagons on Friday and focused their outrage at Politico for reporting on Yellen’s Wall Street riches.

Journalist Michelangelo Signorile questioned why Politico would say that Yellen “raked in” her millions. “Something unseemly or sinister about a smart woman paid well for her thoughts?” he tweeted. “And why is this news?”

In old Republican white man speak “earned” is translated to the more nefarious “raked in” when talking about a female.

Lawyer Midwin Charles, a legal analyst for CNN and MSNBC, said Politico should delete its article because “your misogyny is showing.” She added, “God forbid a world-leading expert, who happens to be a woman, be compensated for her expertise and work. It’s 2021. Stop doing this.”

Here we go again. God forbid a world leading expert – who happens to be a woman – be compensated for her expertise & work. It’s 2021. Stop doing this. https://t.co/ALNHza5mPa

Political strategist Christine Pelosi, daughter of US House Speaker Nancy Pelosi (D-California), said sarcastically that it’s “outrageous that Janet Yellen was paid for these speeches – at lower rates than her male counterparts.”

Outrageous that Janet Yellen was paid for these speeches … at lower rates than her male counterparts. Get on that investigation, Sam! #FairPay https://t.co/Q2eEPYoNMf

Marquette University political science professor suggested that speaking-fee controversies seem to be reserved for women, such as Yellen and former Secretary of State Hillary Clinton. “I haven’t kept track and maybe I’m wrong, but people sure have a problem with successful women earning money.”

But the same Politico article went on to scrutinize the financial disclosure of Biden’s pick for secretary of state, Anthony Blinken, who made nearly $1.2 million in 2018-2019 as his consulting firm advised such major corporations as Facebook, Boeing and AT&T.

“Anyone with the most minimal good faith would instantly see why it’s vital to know how Wall Street has purposely enriched those they know are likely soon to be regulating them,” independent journalist Glenn Greenwald said. “That’s why the Wall Street payments of Larry Summers, a man, were always reported.”

Greenwald added that Politico’s reporters were attacked with “bad-faith bigotry accusations” because the Democratic Party is led by rich people who serve Wall Street and corporate power centers while touting diversity to hide their real priorities.

Anyone with the most minimal good faith would instantly see why it’s vital to know how Wall St. has purposely enriched those they know are likely soon to be regulating them. That’s why the Wall St payments of Larry Summers (a man) were always reported:https://t.co/oaKQYGsDvX

“If you’re embarrassed that your party just put in charge of the Treasury Department someone who got wildly rich by collecting $250,000 checks from Wall Street for one hour of work, then pressure your party to change,” he said. “Don’t exploit misogyny smears to try to deter reporters from revealing it.”

Democrats — including numerous Dem Party-aligned journalists — have spent all day smearing 2 Politico reporters as misogynistic because they had the sexist audacity to report on the very lucrative relationship between Janet Yellen & Wall St., the industry she’s about to regulate: https://t.co/6MQ4e00BJQ 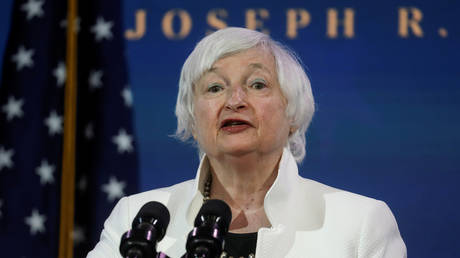