The American Humanist Association has withdrawn its top honor from evolutionary biologist Richard Dawkins over a tweet calling for dialogue on transgender issues, accusing the atheist speaker of “demeaning marginalized groups.”

The organization said Dawkins had recently implied that “the identities of transgender individuals are fraudulent, while also simultaneously attacking Black identity as one that can be assumed when convenient,” noting he would be stripped of an award granted to him some 25 years ago. It declined to specify the offending comment.

“Regrettably, Richard Dawkins has over the past several years accumulated a history of making statements that use the guise of scientific discourse to demean marginalized groups, an approach antithetical to humanist values,” the AHA said on Monday.

Consequently, the AHA Board has concluded that Richard Dawkins is no longer deserving of being honored by the AHA, and has voted to withdraw, effective immediately, the 1996 Humanist of the Year award.

Today the American Humanist Association Board voted to withdraw, effective immediately, the 1996 Humanist of the Year award it bestowed on Richard Dawkins.

Tap the preview below to read the board’s statement explaining why. https://t.co/VfxMgbISh5

While the Humanist Association gave few other details and offered no examples of Dawkins’ “accumulated history” of inflammatory remarks, an April 10 tweet from the biologist drawing comparisons between transgenderism and the self-described “trans-black” activist Rachel Dolezal is a likely culprit.

He followed up with another post days later, presumably in response to netizens outraged over the first missive, saying he did not “intend to disparage trans people.”

“I see that my academic ‘Discuss’ question has been misconstrued as such and I deplore this. It was also not my intent to ally in any way with Republican bigots in US now exploiting this issue,” Dawkins added.

I do not intend to disparage trans people. I see that my academic “Discuss” question has been misconstrued as such and I deplore this. It was also not my intent to ally in any way with Republican bigots in US now exploiting this issue .

The later post apparently did nothing to appease the AHA, which said that Dawkins’ “subsequent attempts at clarification” were “inadequate” and did not convey “sensitivity” or “sincerity.”

While some observers said rescinding Dawkins’ award was a “good call,” the move also triggered an outpouring of criticism online, with many suggesting the atheist org had become beholden to “woke gods” and adopted a “pseudo-religious” devotion to political correctness.

“Identity politics is the new religion. We can be good without it,” one user wrote, putting a spin on the AHA’s slogan, “Good Without a God.”

The American Humanist Association is using the guise of secularism to enact religious zealotry; offering Dawkins up as a sacrifice to appease their woke gods.

They have quite explicitly placed their political orthodoxy above science, above rational discussion, above reason. The feelings of approved minority groups trump that.

Fair enough, AHA, take that position. It’s your party. But it’s not humanist in any way. It’s pseudoreligious

One self-avowed humanist and Dawkins critic called on AHA members to terminate their ties with the association over its decision, which other users deemed an overreaction to the biologist’s “reasonable” call for discussion.

I’m a humanist, and not a fan of, Dawkins, but if I were a member of @americnhumanist association, this action would lead me to terminate my membership and withdraw financial support. Enough of this nonsense.

Jesus. Disavowed over a tweet. I read the tweet. It was reasonable. These people are not. They have lost their minds.#richarddawkins #humanismhttps://t.co/ehcYW94zdG

This is a very bad call. Many well-intentioned people believe transracialism should be more accepted. That he broached the issue doesn’t mean he thinks trans people are fraudulent.

Dawkins’ April 10 tweet is far from his first controversial post, stoking a wave of condemnation in February after suggesting that eugenics could “work in practice,” while also indicating that he “deplore[d]” the idea on “ideological, political [and] moral grounds.” Before that, he was accused of racism in 2018 after tweeting that the bells of England’s Winchester Cathedral were “so much nicer than the aggressive-sounding ‘Allahu Akhbar’” heard at Muslim mosques, one among several hot-button posts about Islam over the years. 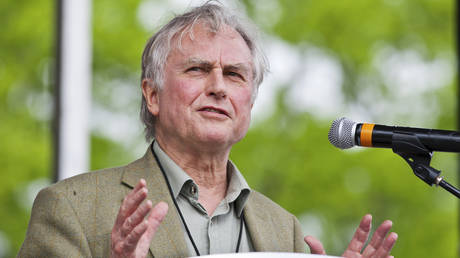